However, Baikal-GVD reports an observation of a high-energy neutrino in coincidence with this flaring blazar and IceCube-211208A. During the alert follow-up examination of data, they found a cascade event with an estimated energy of 43 TeV, arriving 3.95 hours after the IceCube event from a direction 4.68 degrees away from PKS 0735+17 and 5.30 degrees from the best-fit direction of IceCube-211208A. The PSF of Baikal-GVD, estimated by Monte-Carlo simulations for the conditions of this cascade event, has 5.5 deg (50%), 8.1 deg (68%) containment – see the figure next column.

Not taking into account any trial factors, but assuming the source pre-determined by the very approximate the coincidence of the IceCube event and PKS 0375+17, one expects only 0.0044 events per 24 h in the 5.5 deg circle around this source, corresponding to a significance of 2.85σ. 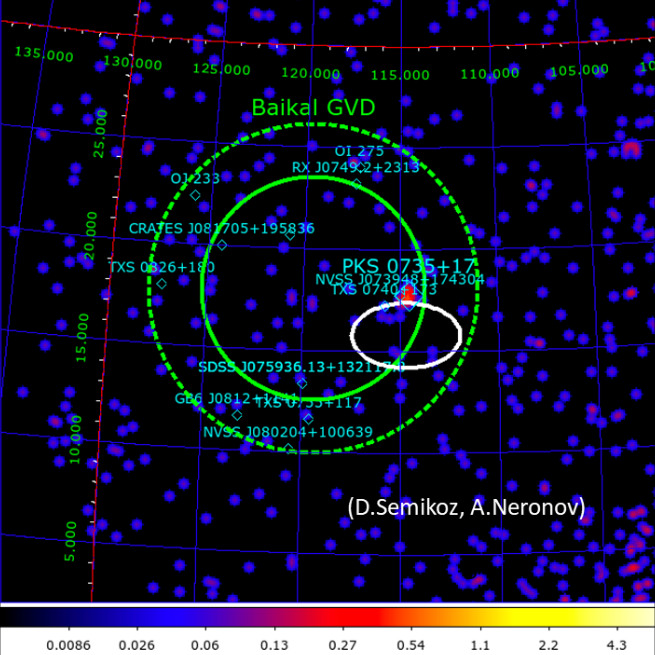 With respect to the radio emission of PKS 0735+17, the Baikal-GVD ATel reports that “historically this source was observed to reach 5 Jy at centimeter wavelengths in its flaring state, making it one of the brightest radio blazars in the sky and therefore a probable neutrino emitter according to Plavin et al. (2020). Continuing VLBI monitoring observations at 15 GHz and 43 GHz show a clear core-dominated parsec-scale jet morphology. Its RATAN-600 spectrum from 2 to 22 GHz is currently undergoing a slow flare and is observed at the level 0.6-0.9 Jy. (RATAN is a huge radio telescope in the Caucasus).

The story may become even more interesting since IceCube has observed a second event which is “compatible” with coming from PKS 0735+17, on December 10. Its most probable energy is 26 TeV. However, this is not a track-like but a cascade event with a huge directional error, of the order of 100° in rectascension and 15° in declination. Therefore, it is not clear how much this event can contribute to the significance of the two other observations, if at all.

As if that were not enough, on December 27, just when this is being written, another ATel appeared (https://www.astronomerstelegram.org/?read=15143). There, the Baksan Underground Scintillation Telescope (BUST) Laboratory reports an upgoing muon consistent with a neutrino from the direction of PKS 0735+17 on December 4, 2021. The best-fit arrival direction is 2.18 deg from PKS 0735+17 (50% PSF containment for 2.5°). The energy threshold of BUST is 1 GeV, in average they record 1 upgoing muon per 8 days.

Let’s see in the next months, how all this might fit together and what a rigid statistical treatment will yield. Whatever the result will be: this is a nice demonstration that GVD is in the game – at the end of a year which had started with the official inauguration of the detector.

News and 2022 plans of the GNN partners

The operation of ANTARES is planned to be terminated at the next possible (weather, ship) occasion. But it will be a termination with several stages. The first opportunity of an IFREMER dive will be taken for the installation of various deep-sea equipment on the close-by KM3NeT site and to disconnect some interlink cables (joining the anchors of the lines and the Junction box). The recuperation of the instruments will happen only at a second stage. All this is always subject to heavy uncertainties as these operations are not a high priority and are always weather dependent.

The collaboration has currently several papers under internal review. This includes a joint paper with IceCube, Auger and Telescope Array. There are also other papers in the pipeline, i.e. several papers coming from the Dark Matter and Exotic Science Working Group. A review of 10 years of operation of the ANTARES alert sending system is close to the final draft.

In Spring 2021, the Collaboration has deployed one new cluster and upgraded/repaired several of the existing seven clusters – accompanied by a big inauguration party on ice. The coming season will see the deployment of two new clusters, plus the installation of some novel equipment. With 10 clusters, the configuration will then reach ~2/3 of its final size.

After a long time of being focused solely on construction, the Baikal-GVD Collaboration has published its first journal paper in 2021: Measuring muon tracks in Baikal-GVD using a fast reconstruction algorithm, Eur. Phys. J. C 81 (2021) 1025 (see June edition of GNN Monthly and 2106.06288.pdf (arxiv.org). In the coming year, several of the ICRC conference contributions will be elaborated to Journal papers.

With all the Japanese D-Egg optical modules produced and tested (DOMs with two PMTs, one upward and one downward facing), the focus of 2022 will be on the production of the mDOMs (the same principle as the KM3NeT DOMs, but with 24 instead of 31 small PMTs and with different electronics).

Several publications on very different topics, sitting since long in the pipeline, are expected to be released in January and February.

KM3NeT also enjoys a positive balance of the present year. In 2021 they have deployed 7 DUs for ARCA and 4 for ORCA, so the total number of DUs is now 8 for ARCA and 10 for ORCA.

For 2022, the Collaboration is preparing various sea campaigns both for ORCA and ARCA. In the first months of the next year, an ORCA sea campaign is foreseen to deploy three more DUs, followed by additional deployments along the year. For ARCA, the deployment of about 10 DUs and two Junction Boxes is planned for May and hopefully another 10 in the second half of the year.

The IceCube paper All-flavor constraints on nonstandard neutrino interactions and generalized matter potential with three years of IceCube DeepCore data (2106.07755.pdf (arxiv.org)) should have been included in the June or July edition of GNN Monthly, but by whatever reason did not appear on my radar screen. Meanwhile, it has been published in Phys. Rev. D 104, 072006.

Differently to the two papers discussed in the November edition of GNN Monthly (Search for Quantum Gravity Using Astrophysical Neutrino Flavour with IceCube (posted at 2111.04654.pdf (arxiv.org) and  Neutrino Interferometry for High-Precision Tests of Lorentz Symmetry with IceCube, Nature Phys. 14, 961–966 (2018), 1709.03434.pdf (arxiv.org)), this paper studies low-energy neutrinos. Again, it makes use of the fact that neutrino oscillation experiments have the unique capability to probe scenarios beyond the Standard Model (BSM) which might be responsible for “Non-Standard Neutrino Interactions” (NSI) independently of the new physics energy scale Λ. Detailed global analyses of available neutrino oscillation data allowing for NSI have so far shown no statistically significant evidence for BSM interactions and have thus been used to place limits on NSI in a model-independent manner. Still, coupling strengths up to the order ∼0.1 at a 90 % confidence level continue to be allowed.

Already in 2018, the IceCube collaboration had published a paper Search for nonstandard neutrino interactions with IceCube DeepCore (Phys. Rev. D 97, 072009). The present analysis is based on an extended event selection that includes neutrinos of all flavors, with reconstructed energies between 5.6 GeV and 100 GeV. The previous study had focused on the disappearance of atmospheric muon neutrinos, while this analysis looks for simultaneous effects in all oscillation channels.

The paper reports constraints on the individual NSI coupling strengths considered singly, allowing for complex phases in the case of flavor-violating couplings. This demonstrates that IceCube is sensitive to the full NSI flavor structure at a level competitive with limits from the global analysis of all other experiments – see the figure. In addition, the paper investigates the case in which all NSI parameters are left open at the same time via a generalized matter potential, whose overall scale and flavor structure are simultaneously constrained from a single experiment for the first time.

My personal work-related wishes for 2022:

1.   Face-to-face meetings instead of zoom only

2.   Face-to-face meetings instead of zoom only

3.   Face-to-face meetings instead of zoom only

and then: something clearly and water-tightly and “one-hundred-percent” above four standard deviations ?

Health, success and fun with physics to all of you,