On 21 August, the next edition of GEEK PICNIC, a popular science festival, took place in Moscow. One of the lecturers of the festival was the researcher from the Sector of Molecular Genetics of the Cell of the Dzhelepov Laboratory of Nuclear Problems Anastasiya Rusakovich. She lectured together with Polina Krivykh, Vitaly Egorov, Vladimir Surdin and other notable science educators.

This year, GEEK PICNIC was held in a new format, on board a pleasure boat on the Moskva River. Up to now, over ten years, the festival has been hosted by the best sites in Moscow, St. Petersburg, Krasnodar and even Jerusalem. In 2016, a record year considering the attendees’ number, there were 29 thousand guests in St. Petersburg and 27 thousand in Moscow. In 2020, the festival was held online.

And now a comeback to the offline format.

The DLNP Group of Scientific Communication asked Anastasiya Rusakovich how the event went on and what about she spoke there.

“It was the first time I participated at the GEEK PICNIC festival. That is why I can’t compare it with the past festivals. The guests told me that the boat trip format was chosen because of the COVID restrictions. There were a lot of those interested in the event, and space onboard was hardly enough for all of them. There were four trips, one and a half hours each, and the festival lasted from 12:30 till late at night.” 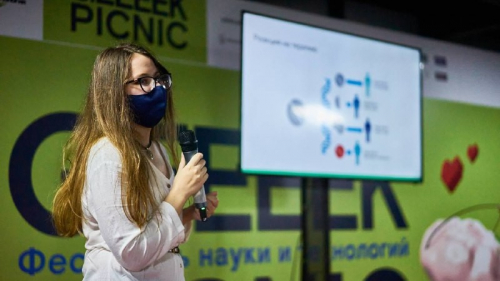 In addition to public lectures, pitches of projects of technoparks from all over Russia, presentations of technology developments from leading institutions of higher education, a cosplay, a VR and AR experience, an exhibition of retro play consoles still in operation, testing of the latest computer games, robot shows and other sophisticated entertainments were announced in the festival programme. There was a dance floor on the upper deck.

“It was my first experience in giving a popular science lecture, and straight away at a big festival. With the audience and their knowledge level being unknown and the timing for quite a complex scientific topic being limited by just 20 minutes, these conditions can’t be called the easiest ones. However, the feedback was positive, people listened with interest and asked questions after the lecture, which is great.”

Anastasiya Rusakovich talked about the research at the DLNP Sector of Molecular Genetics of the Cell in the field of DNA studies on predisposition to allergy and longevity. These studies resulted in receiving a patent for the testing system for a quick answer about the existence or absence of a definite gene in an individual.

The experience of being involved in a popular science event inspired Anastasiya. And she is eager to go further and to give a full-fledged popular science lecture on genetic research being performed at the DLNP Sector of Molecular Genetics of the Cell.

We thank Anastasiya Rusakovich for her narration and wish her success in science and education activities!