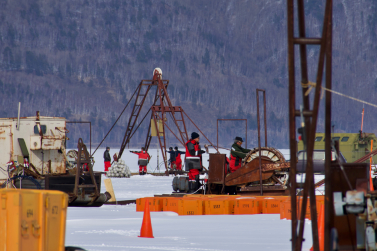 Faculty of Mathematics, Physics and Informatics of the Comenius University, Bratislava, Slovakia

Two new clusters of optical modules of the Baikal deep underwater neutrino telescope, Baikal-GVD, were put into operation. The effective volume of the facility, which already includes five clusters, increased to 0.25 km3.

Organization-members of the international scientific collaboration “Baikal” report that two clusters of the deep-underwater neutrino telescope of cubic-kilometer scale, Baikal-GVD, were brought into operation during the expedition to Lake Baikal from 15 February to 12 April 2019 as the result of joint research, developments, and production in the 2018 – 2019 and assembly.

In total, five clusters now operate in data acquisition mode. Each cluster consists of 8 vertical strings of optical modules with each string containing 36 modules. There are 1440 optical modules in total, placed at a depth of 750 – 1350 m located 4 km away from the bank of Lake Baikal, near the 106th km of the Circum-Baikal Railway. The effective volume of the facility reached a level of 0.25 cubic kilometers for shower events from high-energy neutrinos, thus allowing scientists to expect two to three events per year from astrophysical neutrinos with energies exceeding 100 teraelectronvolts (TeV).

The telescope also consists of a set of advanced devices which use new methods of defining the space axes of the optical modules. These devices are used for the research and monitoring of hydrologic and optical properties of the water environment, and include equipment for measuring the variability of the electrical field intensity in the waters of Lake Baikal.

During the expedition of 2019, double the amount of work was carried out when compared to the previous year. Organizations produced 600 optical and 80 control electronic modules in deep water. Special attention was paid to the reliability of the underwater equipment. All components of the supporting underwater structures, underwater cable trunk and network connections, modems for the hydroacoustic system of positioning, and other elements of the telescope were produced. Technologies for preparation and assembly activities were developed; the parking area for special purpose cars and trucks was extended; work and life conditions of incoming specialists were significantly improved.

The programme of expedition-2019 was fully implemented. In addition, to two new clusters of strings of deep underwater optical modules, and two new bottom-lying underwater lines of cable communication were built connecting the facility with the coastal center. All of the telescope’s systems have been repeatedly tested and put into regular data acquisition mode.

The results of the expedition were reported on in online diaries and, for the first time, in short professionally arranged video coverage (http://dlnp.jinr.ru/ru/bajkalskij-dnevnik/bajkalskij-dnevnik-dmitriya-naumova).

The Baikal-GVD telescope is aimed at the study of the natural flux of high-energy neutrinos. As a result of interactions of neutrinos in the waters of Lake Baikal, charged leptons and cascade showers are produced that generate Cherenkov radiation, which is registered by the optical modules of the facility. The electronic system of the telescope measures the exact time of radiation registered by the optical modules with accuracy up to billionths of a second, thus making it possible to reconstruct tracks of moving particles with an angular accuracy of fractions of a degree.

For characteristic energies of particles studied at the neutrino telescope, tracks of charged particles nearly coincide with the arrival direction of astrophysical neutrinos, travelling towards us without any deviations from their source and nearly without energy loss. That is why deep-underwater neutrino telescopes, after reaching a particular size, open the era of neutrino astronomy, thus allowing the study of the structure and processes of the Universe at a distance that cannot be achieved by any other means.

Astrophysical high-energy neutrinos were registered for the first time by the neutrino telescope IceCube at the South Pole (USA, Germany, and Sweden). It proved the potential of the creation of a set of similarly-sized telescopes in accordance with the proposal made by M. A. Markov in 1960.

The results of data processing obtained using the Baikal-GVD clusters installed earlier showed its ability to register high-energy neutrinos and the need to extend its volume in order to increase its reliability and the accuracy of the results. Properties of the Baikal waters, as well as the composition of other circumstances, give an opportunity to create the unique facility in terms of its sensitivity and angular resolution, thus opening new horizons in astronomy and astrophysics.

The Baikal deep underwater neutrino telescope is a unique scientific facility of Russia, and, along with IceCube, ANTARES and KM3NeT, is included in the Global Neutrino Net (GNN) as the most significant element of the net in the Northern hemisphere and as the first step in the creation of the international scientific consortium “Global Neutrino Observatory” (GNO). The key results of this work, as with the results of our colleagues from IceCube, ANTARES, and KM3NeT, are published in the monthly issue of GNN Monthly, a bulletin of the Global Neutrino Net. Scientific results will be published in leading Russian and foreign journals and reported on at scientific conferences and seminars.

Telescopes located in the Northern hemisphere have an important advantage: they can carry out almost permanent monitoring of the Centre of the galaxy (Baikal-GVD operates 18 hours a day; KM3NeT operates 15 hours a day) and the galactic plane where a major part of potential galactic sources of cosmic rays is concentrated (pulsars, rests of supernova, dual systems and etc.), including the supermassive black hole Sgr A* in the center of the galaxy. Joint work in the net provides permanent observation of the entire celestial sphere without loss in effectiveness, and this is the aim and the advantage of joint activities.

G. V. Domogatsky, Head of the Laboratory of Neutrino High-Energy Astrophysics of the INR RAS, Doctor of Physics and Mathematics, RAS Corresponding Member, Head of the “Baikal” collaboration

V. B. Brudanin, Doctor of Physics and Mathematics, Professor, Head of the Scientific and Experimental Department of Nuclear Spectroscopy and Radiochemistry, Head of the “Baikal” experiment in JINR

A. Belolaptikov, Head of the “Baikal” experiment in JINR

Text and illustrations of the press release are available on the website: http://www.inr.ru/bgnt/ 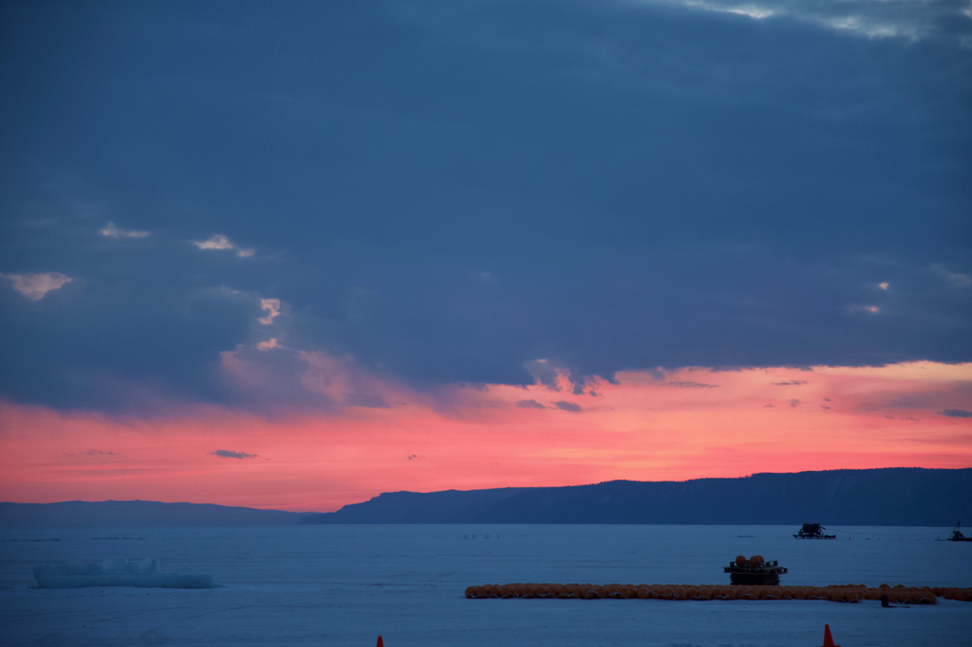 View over the coastal centre seen from Baikal. 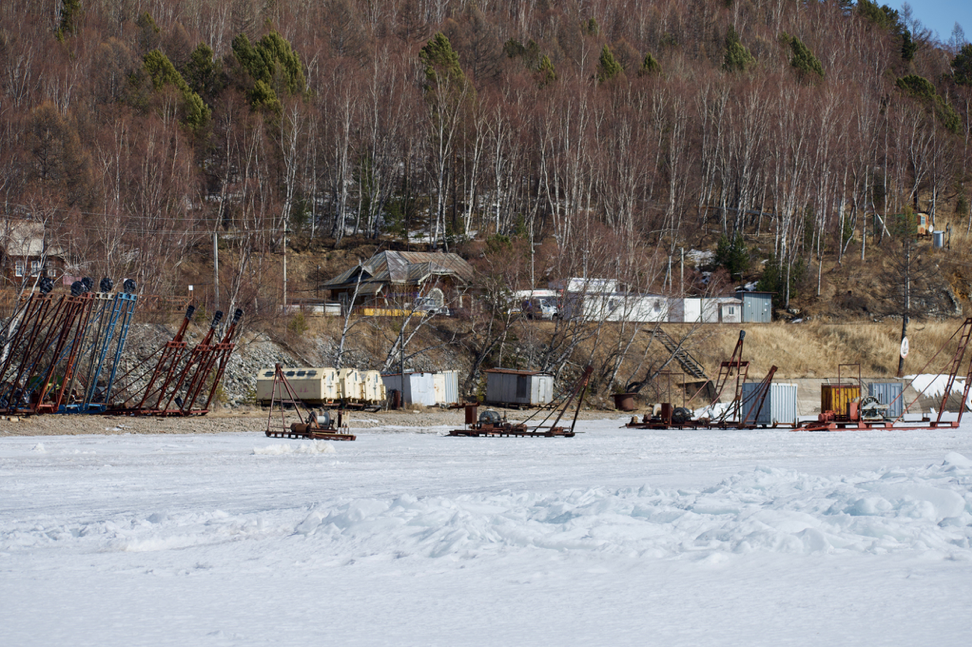 View over a part of the ice camp in fine weather. 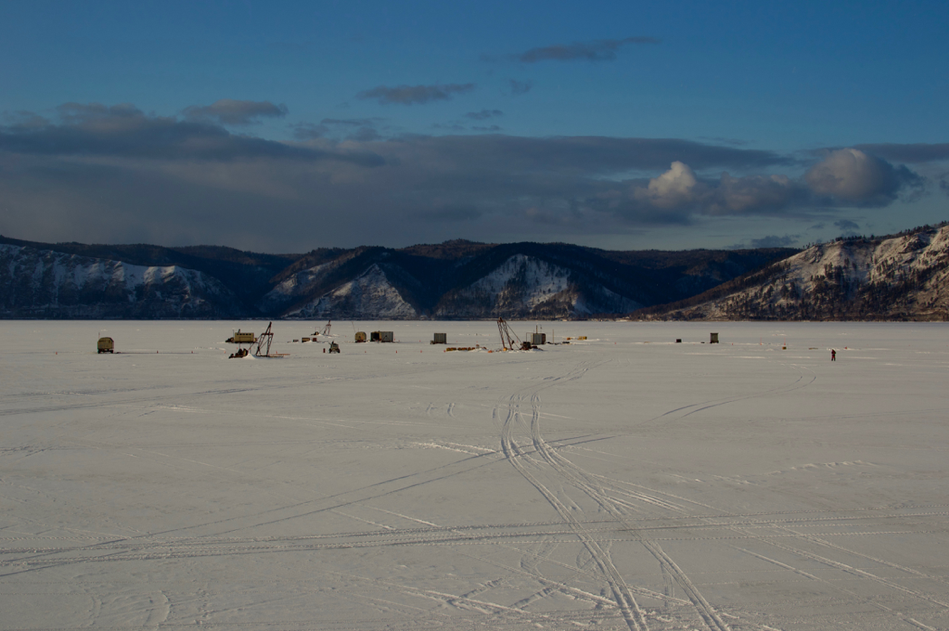 If one works hard from day to night, space may be seen with the naked eye. 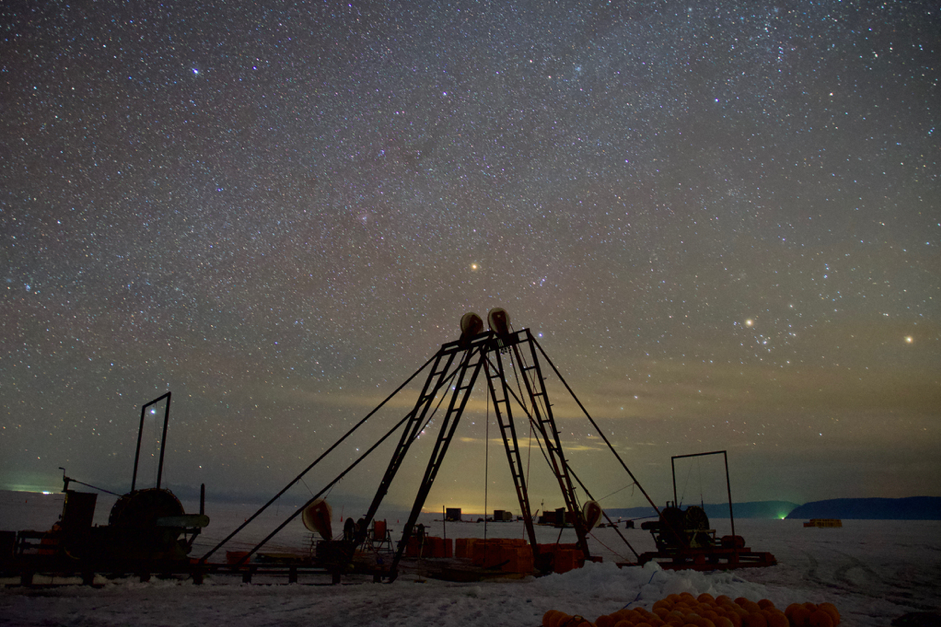 Deep underwater assembly of a string. 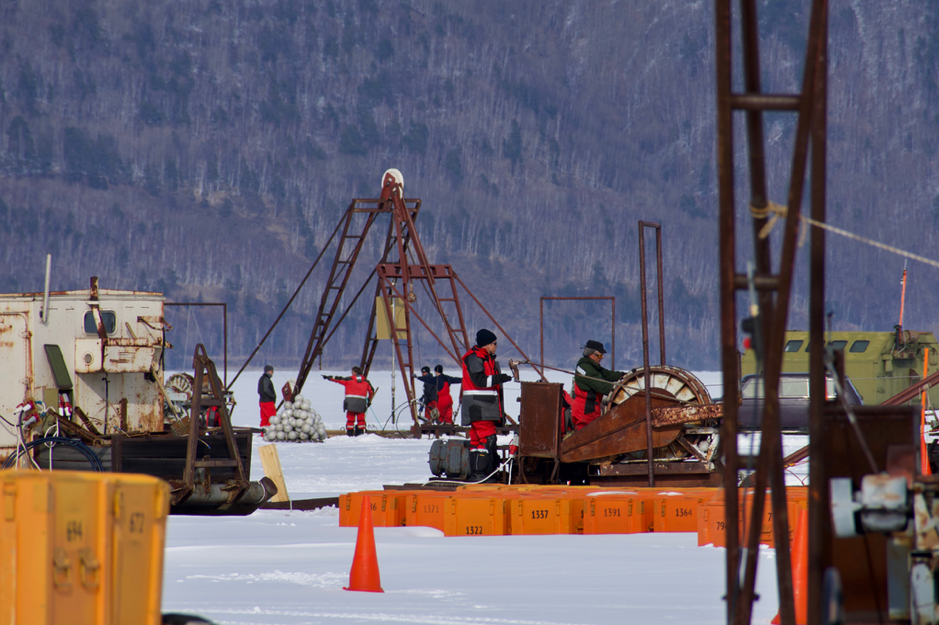 Night frost on Lake Baikal is a reason for morning exercises. 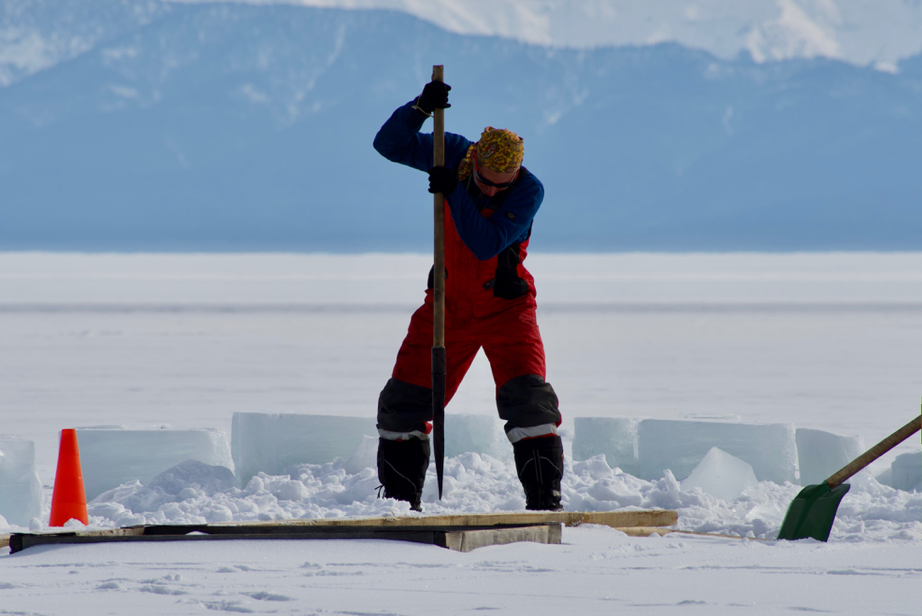 One more optical module is prepared for immersion. Central module of the section. 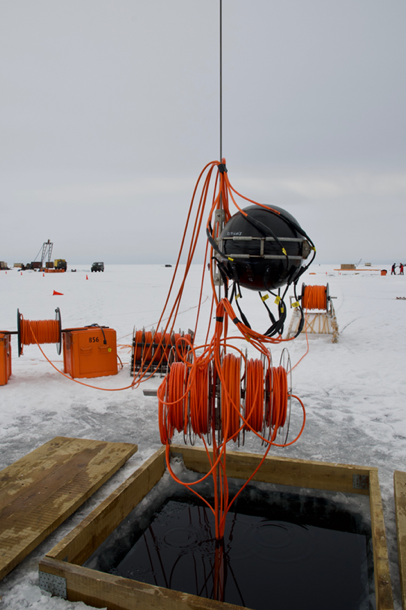 Assembly of the lake-bed optoelectronic cable from the cluster to the coastal centre – 6 km. 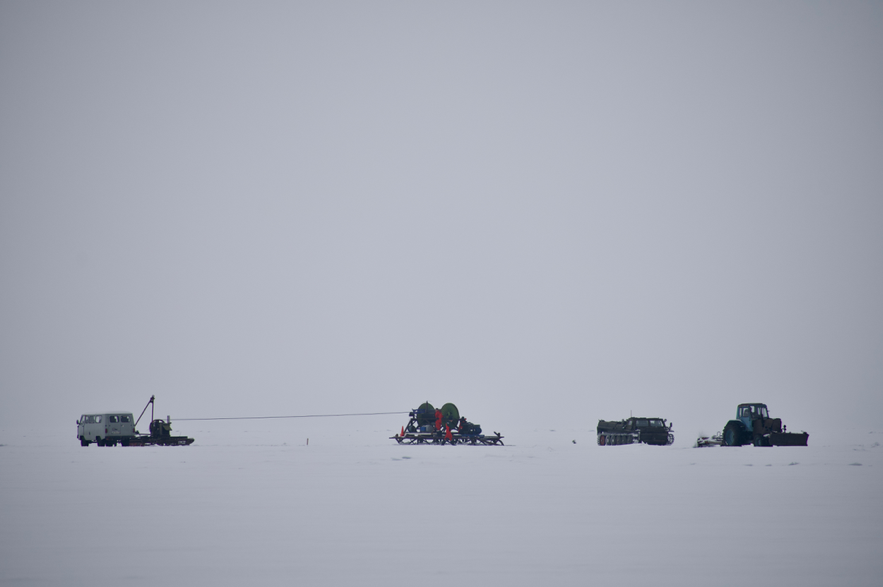 New carriage-houses with cabins for individual accommodation and new transport for transportation of the staff to the ice of the lake. 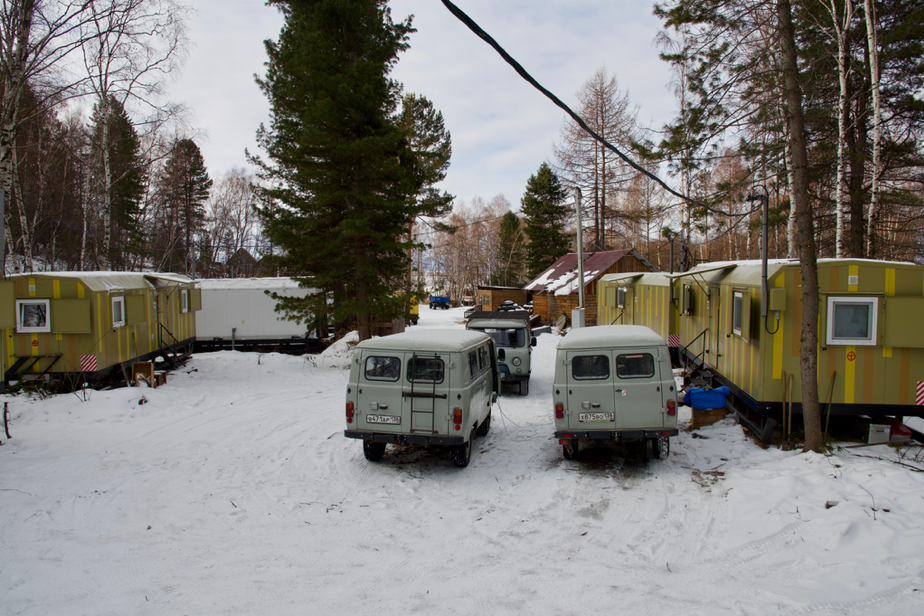 Windlass is the main device for carrying out deep underwater assembly on ice. The last photo before leaving the ice. Expedition 2019 is completed. 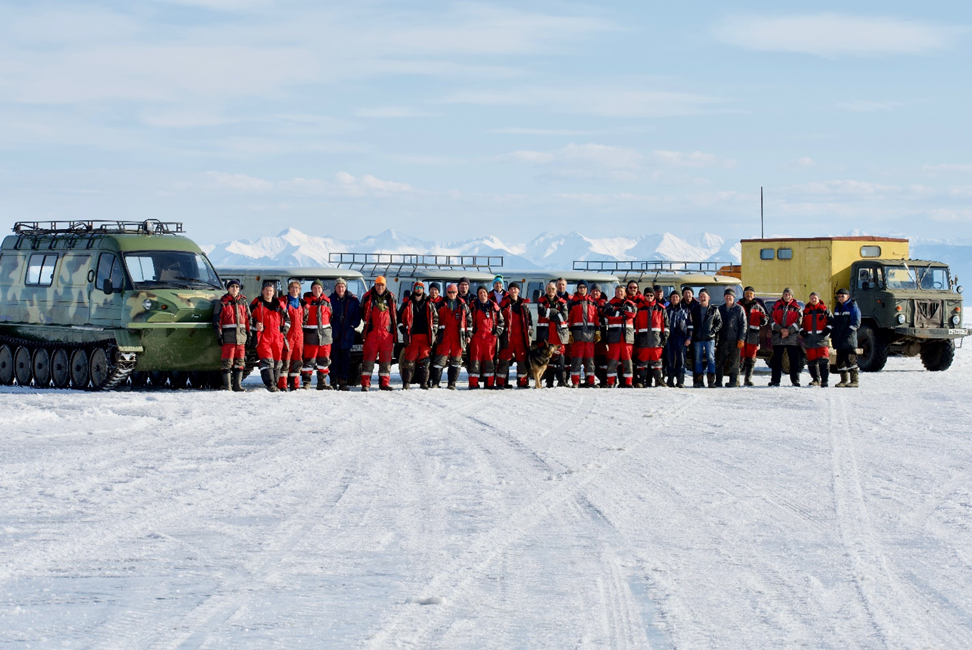