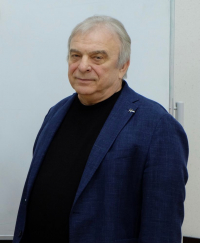 On 28 December 2020, Viktor Borisovich Brudanin passed suddenly away, an outstanding scientist, professor, chief researcher of the Experimental Department of Nuclear Spectroscopy and Radiochemistry (EDNSR) of the Dzhelepov Laboratory of Nuclear Problems, one of the world’s leading specialists in non-accelerator neutrino physics.

V. B. Brudanin was a member of the JINR Science and Technology Council and also of that at DLNP, a deputy chair of the specialized DLNP Committee on Candidate and Doctor Dissertations and the head of the seminar on low-energy physics and nuclear structure. In 1995—2005, he was a DLNP Deputy Director for Low-Energy Physics.

A long-lasting and prolific span of his activity referred to development and implementation of the NEUTRINO project in the 1980s. At this time, he was already an expert in nuclear spectroscopy.

Since 1991, V. B. Brudanin was the head of studies in non-accelerator neutrino physics, astrophysics, fundamental interaction in nuclei at low temperatures. He managed to create a high-performance team, invited young scientists and engaged with his enthusiasm, experience and knowledge his colleagues into a wide range of fundamental and applied research.

Under his leadership, experiments at the cutting edge of contemporary science, such as TGV, NEMO, GERDA on the search for and study of double beta decay processes, were designed, and they are still being conducted. Fundamental results obtained are included in the Review of Particle Properties and are the best to date. Since 2005, experiments with reactor antineutrino got underway—GEMMA (measurement of antineutrino magnetic moment), DANSS (study of intrareactor processes) and nuGeN (an ambitious task of detecting coherent neutrino scattering off nuclei). Over the last few years, he focused on construction of BAIKAL-GVD, a new-generation neutrino telescope. All the projects of the Joint Institute for Nuclear Research headed by V. B. Brudanin are of high priority.

V. B. Brudanin was awarded a badge “Veteran of Nuclear Power Engineering and Industry”, a badge “Academician I. V. Kurchatov” 4th class, a Certificate of Honour of the Governor of the Moscow region and the title “Honorary JINR employee”. He was given the Order of the French Republic.

Viktor Borisovich was for many people a paragon of a highly skilled scientist with a creative attitude to everything he did. A great physicist, gifted leader, wonderful mentor of young scientists, a man of stainless and cultured personality, our dear fellow.

We, his colleagues, students, friends, sincerely commiserate with his family. We will keep a bright memory of Viktor Borisovich Brudanin in our hearts forever.