Today, it is the 95th birthday of a renowned scientist, Doctor of Physics and Mathematics, corresponding member of the Academy of Sciences of the USSR (ASU), Sergey Mikhailovich Polikanov.

In 1950, after graduating from the Moscow Engineering Physics Institute, S. M. Polikanov started his career at the Institute of Atomic Energy where he worked under the guidance of G. M. Flerov. Since 1957, the scientist continued working with G. M. Flerov at the Laboratory of Nuclear Reactions of the Joint Institute for Nuclear Research.

Since 1970, S. M. Polikanov worked at the Laboratory of Nuclear Problems where he headed a department.

He is mostly known as one of the discoverers of spontaneously fissioning isomers of heavy nuclei. In 1974, he was elected an ASU corresponding member in the nuclear physics section.

He was awarded the Order of Lenin, was a laureate of the Lenin Prize.

In 1978, he was deprived of the state awards, the degree of Doctor of Sciences and the ASU corresponding member rank as a result of disagreement with scientific functionaries and later with the Soviet leadership. In October 1978, he got the exit permit and emigrated from the USSR. He worked abroad at the Niels Bohr Institute (Denmark), CERN and the Institute for Heavy Ion Research (Germany).

The author of the book “Break-Up: Notes of a Nuclear Physicist”. 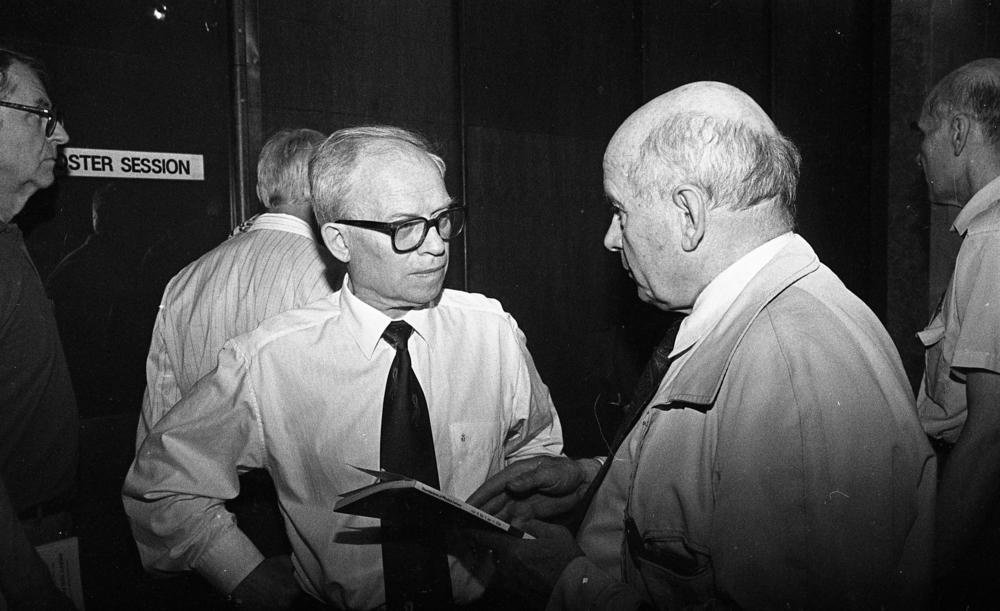 S. M. Polikanov (GSI, Darmstadt) and A. A. Tyapkin are talking. Photo from the JINR Archive

The leading researcher of the Dzhelepov Laboratory of Nuclear Problems G. A. Chelkov has shared his memories about Aleksei Alekseevich Tyapkin. Today, it is the 95th birthday of A. A. Tyapkin. We go...

“Supervisor and His Student”. Memories of Yu. Ts. Oganessian about A. A. Tyapkin

Academician Yuri Tsolakovich Oganessian has shared his memories about Aleksei Alekseevich Tyapkin. — In 1953, after my third year at MEPhI, I was sent to the Hydroengineering Laboratory, a secret...

Professor A. A. Tyapkin “My Way to Physics”. Part 1. Parents and Their Origin. Childhood and Youth

Today, it is the 95th birthday of Doctor of Physics and Mathematics, Professor Aleksei Alekseevich Tyapkin. He, a renowned scientist, sportsman, and public figure, was also a talented narrator....

This year, 26 December marks the 95th birthday of Doctor of Physics and Mathematics, Professor Aleksei Alekseevich Tyapkin. It is no exaggeration to say that this name is known to every inhabitant...

Twenty years ago, the building of Dubna’s legendary café “Neutrino” near the railway station “Dubna” was demolished. The cafe experienced its greatest days in the far-away 1970s, but its fame was so...

Today, it is the 95th birthday of a renowned scientist, Doctor of Physics and Mathematics, corresponding member of the Academy of Sciences of the USSR (ASU), Sergey Mikhailovich Polikanov. In 1950,...

JINR Order of 26 August 1991 on Departization and Depoliticization

Exactly 30 years ago, on 26 August 1991, an Order on departization and depoliticization was issued at JINR according to which any activities of party or political organizations at our Institute were...

Bruno Maksimovich Pontecorvo was an avid cyclist and knew how to ride a bike both with no hands and sitting hind-foremost. It is how he was pictured on the caricature by Mikhail Bilenky, the son of...

Summer, the Volga and a motor ship are Dubna’s evergreens. Attendees of the 1963 International Conference on High-Energy Accelerators are having a good time onboard. The “Sviyaga” motor ship. Early...

Here is a nice photograph we have found in the DLNP archives. The entrance checkpoint and the building of the Laboratory of Theoretical Physics (LTF) are featured in it. Considering the clothing...

It’s spring. Dubna is young, and so is Bruno Pontecorvo. Do you know the street?