The joint Russian−Cuban project “High-Resolution SPECT/CT Method Based on Medipix Detectors” (Single-Photon Emission Computed Tomography/Computed Tomography) involves scientists from the Joint Institute for Nuclear Research (JINR) in Dubna, not far from Moscow, and researchers from the Cuban scientific centres CENTIS and CEADEN. The spokesperson of the project on the part of Russia is A. S. Zhemchugov, a deputy head of the Experimental Department of Colliding Beams (Dzhelepov Laboratory of Nuclear Problems of JINR), and the spokesperson on the part of Cuba is the senior researcher A. Leyva Fabelo (Center for Technological Applications and Nuclear Development, CEADEN).

The project is aimed at finding a way to obtain high-resolution and high-quality X-ray and single-photon emission tomographic images of small animals. Computed tomography is a proven, reliable, and effective way to diagnose different diseases while X-ray computed tomography (CT) allows obtaining very sharp images of internal organs. Thanks to their high sensitivity, single-photon emission and positron emission tomography (PET) provide the opportunity to observe the accumulation of special radiopharmaceuticals in definite regions of the body, e.g., in tumours or tissues with acute inflammatory processes. These methods combined permit not only diagnosing a disease early but also localizing it in the patient’s body.

What is more, computed tomography is indispensable while developing new drugs. SPECT and CT combined allow obtaining information about the motion in the body and chemical transformations of drugs in the body, with drug molecules previously tagged with a radioactive isotope. Of course, this kind of study is performed on laboratory animals, first of all, on mice and rats. Appropriate devices are needed to conduct such investigations successfully. The spatial resolution of a regular clinical SPECT tomograph is about 1 cm, which is slightly smaller than the size of a laboratory mouse, and therefore the investigated material cannot be localized in the animal with sufficient precision. Specialized tomographs with significantly higher spatial resolution are needed, not less than 1 mm. At present, commercial devices with such characteristics are hardly available.

The main problem impeding the wide spread of such devices is the detector, a unit to detect X-ray radiation while performing CT and nuclear gamma radiation while performing SPECT. And it is SPECT that causes the main difficulty because not only a gamma-quantum hitting the detector should be detected but also its arrival direction. Traditional ways (Anger camera, pinhole collimators) either are incapable of providing the necessary spatial resolution or have low efficiency, which results in an unacceptable long time needed to obtain an image. For this reason, it is the development of a SPECT detector that is the key element for the success of this project.

Russian scientists involved in the project have a wide experience in developing particle detectors, mainly for experiments in high-energy physics. One of the detectors, a semiconductor pixel detector Medipix, developed by the international consortium at CERN in Geneva, turned out to be suitable to solve applied problems of obtaining images using X-rays and gamma-quanta. The Medipix detector has 65 thousand pixels 55 µm ⨉ 55 µm in size and permits obtaining images of high quality with a low noise level and simultaneously determining the energy of each X-ray photon or gamma-quantum involved in the image formation. JINR has been taking part in the Medipix consortium since 2016. Over this time, the project members got a wide experience in operating the Medipix detector and applying it in X-ray tomography. Cuban colleagues from the isotope centre CENTIS, who develop new radiopharmaceuticals and investigate drug delivery, proposed to use this detector for designing a special SPECT/CT tomograph to study laboratory animals. The key characteristic of a tomograph of this kind is the spatial resolution not less than 1 mm while performing SPECT.

As previously mentioned, Medipix detectors can be easily used for X-ray computed tomography. Before the joint Russian-Cuban project started, Russian scientists had successfully obtained X-ray tomographic images with a resolution of about 50 µ. The main objective is to reach a good SPECT spatial resolution with a rather high efficiency of detection of gamma-quanta with higher energy than that of X-rays. Gamma-ray astronomy and the Kurchatov Institute’s experience in developing gamma cameras, devices used in elimination of radiation accidents, are there to help to solve this problem. To determine the gamma-quantum direction, special coded aperture masks have long and successfully been used in both cases (see Fig. 1).

During the first year of the project implementation, tungsten coded aperture masks 500 µ thick were designed and manufactured. The working region of the mask is 22.1 mm ⨉ 22.1 mm and contains almost 2000 collimating apertures 360 µ in diameter. The cooperation with colleagues from Cuban scientific centres CEADEN and CENTIS made it possible to specify key parameters of coded aperture masks considering requirements for SPECT images of laboratory animals. Professor O. P. Ivanov, a researcher from the Kurchatov Institute, considerably contributed to the design and manufacture of masks. A detector based on a Timepix microchip (one of Medipix variants) with a sensitive cadmium telluride element and a fastening for the coded aperture mask that guarantees mechanical precision and allows turning the mask when needed were manufactured (see Fig. 2). 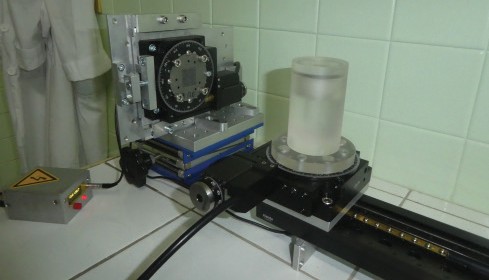 Figure 2. SPECT detector and phantom manufactured at JINR (during investigations in Cuba)

It permits reducing noise in imaging. Software was developed for image reconstruction and detector simulation. The simulation turned out to be very helpful for optimizing the size and structure of the detector. Measurements conducted together with Cuban colleagues from CEADEN using X-ray and radioactive sources during 2019 demonstrated that the detector was quite suitable for SPECT and allowed reaching the necessary spatial resolution. It paves the way to develop a combined SPECT/CT tomograph to study laboratory animals.

The Cuban scientists are preparing the project from this direction. During 2019, calculations, research and development for biological shielding and the tomograph mechanical structure were performed at CEADEN. In February 2020, the Russian scientists brought the detector to Habana. Here they and their Cuban colleagues studied detector characteristics using liquid radiopharmaceuticals (Fig. 3).

Plenty of experimental data was obtained which, on the one hand, proved the operating capacity and the main characteristics of the device (Fig. 4) and, on the other hand, will allow developing and modifying the software for tomographic image reconstruction simultaneously using the SPECT and CT information.

Figure 4. Image of a contrasting phantom (left) and a capillary 1 mm in diameter (right) filled with radiopharmaceuticals

Meanwhile, Cuban colleagues are proceeding with the development of a prototype SPECT/CT tomograph for studying laboratory animals at CENTIS (Fig. 5). In 2021, the project members hope to test its operation in real conditions. 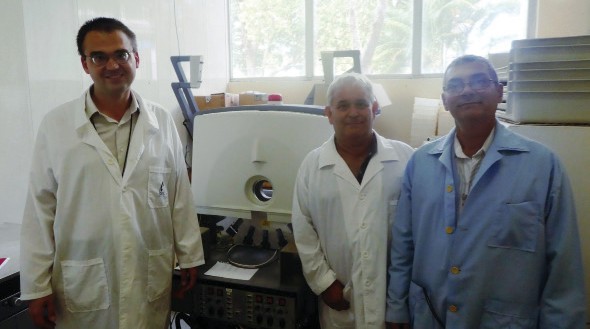 Main publications on the project results

The article was published in the “RFBR Journal”: https://www.rfbr.ru/rffi/portal/bulletin/o_2125361