"Ho Ho Ho", the Christmas gift for KM3NeT has been delivered: the second main electro-optical cable and its power feeding and control system, acquired under the IDMAR project, have been successfully deployed at the Capo Passero KM3NeT-ARCA site close to Sicily.

The cable, equipped with 48 fibers (2 of them dedicated to system control) and 2 conductors, will be used to connect the ARCA Phase 2 subsea network and Detection Units (DUs). At about 96 km from shore the cable is split in two branches (or segments): the northern branch (22 fibers) will be dedicated to completion of ARCA-block 1, the southern branch (24 fibers) to connection of block 2.

The Pierre de Fermat vessel left the port of Calais (France) November 6th, after loading the cable from the Alcatel Submarine Network plant. November 21 the shore end was completed and the cable was safely put on the new beach man hole.

Tests of optical fibers and conductors were perfectly in agreement with design specification.

Meanwhile the Power Feeding Equipment (PFE) and the control and routing cabinets have been installed in the ARCA Shore Station. The PFE can provide up to 80 kW using a double power supply at +6kVDC/-6kVDC to ensure partial redundancy in case of failure. The PFE remote control has been also deployed and tested.

End of next year a Cable Termination Frame will be connected to the northern branch, providing access to fibers and power through 16 optical and electrical ROV mateable connectors. 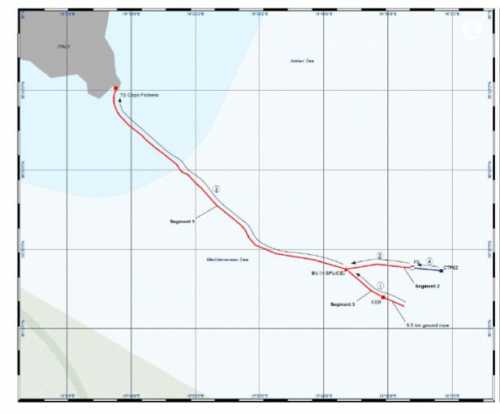 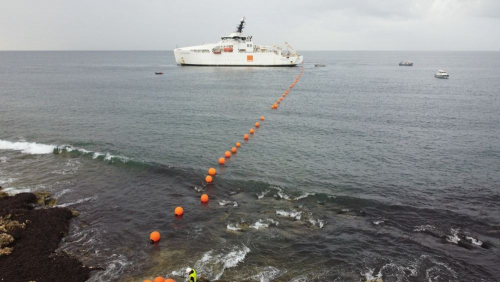 Baikalists successfully performed their second online collaboration meeting. Much emphasis was given to the online data analysis pipeline and the possibility to quickly send alerts and to react on the alerts of others. Steady progress is also achieved with understanding low-level effects of the detector and modelling of these effects.

The winter expedition comes closer. The early-bird team will leave Moscow mid of February. Taking into account the pandemic situation, the collaboration will try to make sure that most people are vaccinated with the Sputnik vaccine which has been developed in Russia. Actually the first person has already been vaccinated. The vaccine begins to protect only after ~40 days, therefore hurry is required.

Halo-time at the South Pole!

Both new winterovers arrived at the Pole – and were met by beautiful halos: 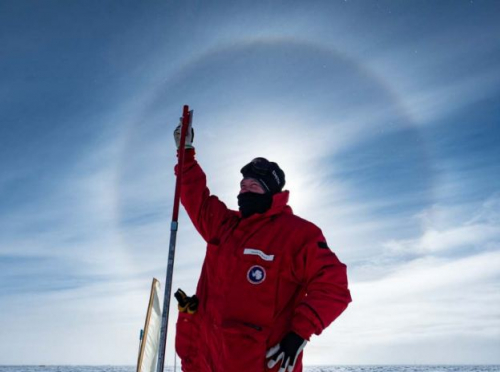 “Saint Martin” demonstrating the proper use and positioning of a laser rangefinder. 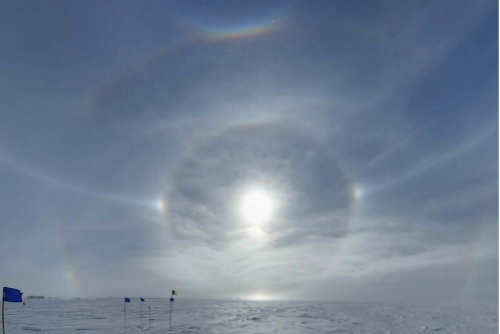 A textbook halo! Explanation by Josh: “This image shows one of the better ice halo systems we’ve seen this season – and we’re only two weeks in! John took this panorama covering over 100 degrees of sky. You can clearly see the 22 degree halo, the Sun dogs (parhelia) and the parhelic circle. Also visible (bottom to top) are the tangent arc, the Suncave Parry and circumzenithal arc. The lower "double halo" is the infralateral arc and the upper is the supralateral. There is also possibly a faint 46 degree halo visible, but it’s usually difficult to tell. These structures form when Sunlight passes through differently shaped ice crystals - read all about them on  Atmospheric halos (atoptics.co.uk). 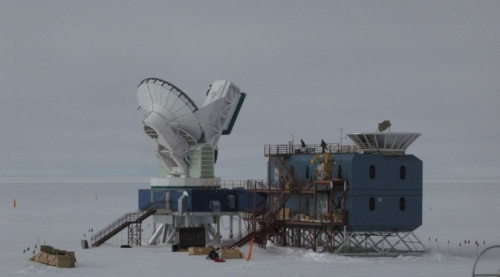 South Pole Telescope and BICEP3. The BICEP detectors and SPT operate in the 100-200 GHz range and explore the cosmic microwave background radiation, its polarization and its modulation by galaxy clusters through the Sunyaev-Zeldovich effect.

(All pictures taken by the winterovers, with exception of the last one which is taken from Wikipedia.)

French artist Laurent Mulot developed an art project named Aganta Kairos (“Fishing the metaphysical time”). The key action of the project is the inauguration of a plaque “for celebrating the neutrino, the ghost particle”, which is considered as a cosmic messenger by scientists and as a link between people from Laurent’s perspective. By now, people living or working at six locations (Madagascar, New Zealand, Greenland, Antarctic Ocean, Porquerolles Island/Mediterranean Sea and Lake Baikal) have already participated. The South Pole with IceCube is the logical next step.

On December 21, within a small ceremony, the South Pole plaque was installed on roof of the IceCube Laboratory. See below the plaque with its text and a photo from the inauguration ceremony. 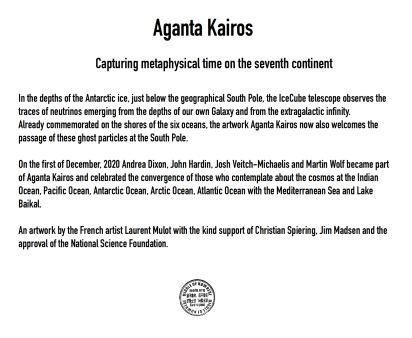 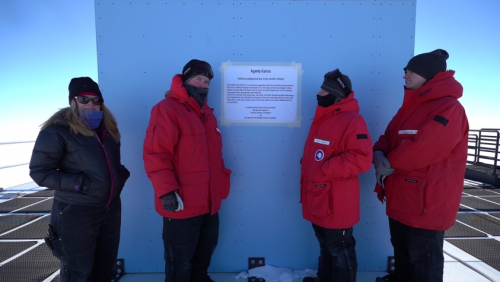 Andrea Dixon, John Hardin, Josh Veitch-Michaelis and Martin Wolf inaugurating a preliminary version of the Aganta Kairos Plaque on top of the IceCube Laboratory (the final plaque did not yet make it to the Pole due to the Corona-related weight limitations for Pole transports).

Spencer Klein (UCB and LBNL Berkeley) was elected fellow of the American Association for the Advancement of Science (AAAS), recognizing his “contributions in the interface of astrophysics, nuclear physics, and particle physics, including neutrino astrophysics and ultra-peripheral collisions of heavy ions.”   The AAAS is one of the world’s largest multidisciplinary scientific societies, it publishes the Science journal and annually elects fellows for their research which has helped to advance science. 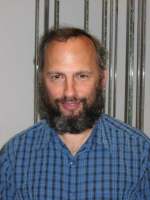 We are drilling persistently through thick planks, but alas!, we did not yet make it – as the three GNN papers of this month show.

The ANTARES collaboration has performed a Search for correlations between neutrinos recorded by the ANTARES detector and GRBs detected by IACTs (submitted to the Journal of Cosmology and Astroparticle Physics and posted at 2011.11411.pdf (arxiv.org) .

The time windows analysed started 350 seconds before the satellite trigger and ended with the end of the IACT observations – ~8 and ~10 hours for the H.E.S.S.  GRBs which covered only the afterglow, much later than the satellite-signal, and less than one hour for the MAGIC GRB which also covered the prompt emission phase (after ~40 minutes the MAGIC observations ended).

No coincidences have been found. This null result allows to set upper limits on the neutrino spectral fluence and on the isotropic energy equivalence radiated through neutrinos within the 5−95% energy range of the search for each GRB event, and to compare these limits to the electromagnetic observations. The upper limits for the isotropic energy equivalence emitted in neutrinos are 2-3 orders higher than those observed in gamma rays. Limits were also set on the fraction of energy going respectively into pions and electrons, which varies between \(f_{\pi}/f_e \leq 80\) for GRB (180720B) and \(\leq\) few thousands for the other two GRBs.

IceCube has also taken a closer look at GRB 190114C [ATel #12395, see also the third paper below]. Interestingly, the neutrino spectral fluence upper limits for IceCube and ANTARES are in the same ballpark within the 5−95% sensitive energy range of the two analyses. The source was seen from above horizon for both detectors during the search period. The results on the 90% C.L. upper limit one-flavor fluence normalisation are 0.44 GeV·cm−2 [100 TeV to 20 PeV] for IceCube and 1.6 GeV·cm−2 [7 TeV to 20 PeV] for ANTARES. Note that the 5%-95% sensitivity range of ANTARES extends to much lower energies – important since most GRB model predictions show a strong spectral dependence, making it is essential to cover a wide energy range. While the IceCube analysis was performed only for muon-neutrinos, the much smaller ANTARES search is sensitive to all neutrino flavors.

With respect to the full GRB population, the limits derived from this analysis cannot compete with the stringent constraints from GRB stacking analyses performed by ANTARES and IceCube.  On the other hand GRBs with high-energy gamma emission may differ from average GRBs, making the analysis interesting on its own.

The IceCube Collaboration has submitted a paper A search for time-dependent astrophysical neutrino emission with IceCube data from 2012 to 2017 and posted it at 2012.01079.pdf (arxiv.org).

The authors performed a scan of the whole sky, making no prior assumption about source candidates, and looked for any space and time clustering of high-energy neutrinos in data collected between 2012 and 2017. No statistically significant evidence for a time-dependent neutrino signal was found. Even the most significant hotspot was compatible with background fluctuation and was not associated with a known gamma-ray source. Note that the second-most significant hotspot was compatible with the location of TXS 0506+056, the blazar from the 2017 detection. In the present analysis it was not significant because the famous coincidence of one neutrino with a gamma-ray flare from 22 September 2017 is by purpose not considered and the huge trial factor greatly reduces the final significance of the result.

Within the considered period the blazar 3C 279 showed strong variability, with a prominent, short gamma-ray flare recorded by Fermi-LAT on June 16, 2015. This motivated a dedicated study of the blazar, searching for a time-dependent neutrino signal correlated with the gamma- ray emission. Assuming that the neutrino emission would follow the intensity of the detected gamma rays, one arrives at a p-value of 19%, which is compatible with background. The 90% C.L. upper limit for the day of most intense gamma-ray activity of the blazar was calculated and used to constrain the neutrino emission model presented by Francis Halzen and Ali Kheirandish in a paper from 2016 1605.06119.pdf (arxiv.org). This model, which is purely hadronic, estimates the number of neutrinos that should be detected by IceCube as function of the Lorentz boost of the jet of the blazar (Г) and of the energy of the target photons (\(E^0_\gamma\)).  In the figure below the experimental upper limit of 2.18 events is compared to predictions of the model (shown here for the case of \(p\gamma\) interactions).

Small ratios of neutrino energies lead to more stringent limits. Large \(E^0_\gamma / Г^2\) (> 105) are excluded in case of pg interactions, while for pp-interactions (not displayed here) the range Г < 20 is disfavored.

The IceCube Collaboration has submitted a paper Follow-up of astrophysical transients in real time with the IceCube Neutrino Observatory  to Astrophysics Journal , posted at 2012.04577.pdf (arxiv.org).

Since 2016, IceCube has been using low-latency data to rapidly respond to interesting astrophysical events reported by the multi-messenger observational community. The paper describes the pipeline used to perform these follow up analyses and provides a summary of the 58 analyses performed as of July 2020. No significant signal has been found in these analyses. However, the pipeline has helped inform various electromagnetic observing strategies, and has constrained neutrino emission from potential hadronic cosmic accelerators, including fast radio bursts, extreme blazar flares, bright gamma-ray bursts, and sources of gravitational waves.

The picture below shows, as an example, results for the gamma-ray burst GRB190114C (see also the corresponding ANTARES paper above), one of the three (meanwhile four!) GRBs ever been detected by IACTs. The plot shows the flux as a function of energy, where blue tones are results from X-rays to very high energy gamma rays. The upper limit on the high-energy neutrino flux, one of the results reported in the paper, is shown by the solid magenta line.

The most recent IceCube paper, LeptonInjector and LeptonWeighter: A neutrino event generator and weighter for neutrino observatories, is posted at 2012.10449.pdf (arxiv.org).

Both LeptonInjector and LeptonWeighter are designed for Gigaton-scale Cherenkov neutrino telescopes. The neutrino event generator allows for quick and flexible simulation of neutrino events (GeV to PeV+) within and around the detector volume, and implements the leading Standard Model neutrino interaction processes relevant for neutrino observatories: neutrino-nucleon deep-inelastic scattering and anti- neutrino-electron annihilation. The generator factorizes the problem of Earth and atmospheric propagation from the event generation. This allows for streamlined and efficient production of neutrino events. The paper discusses the event generation algorithm, the weighting algorithm, and the main functions of the publicly available code, with examples.

Illustration of the different event generation and weighting steps for traditional methods compared with the LeptonInjector and LeptonWeighter philosophy.

Here are the conference website and the relevant dates

15 March 2021 Deadline for nominations for prizes and awards

Go to the webpage to learn more about the unusual, novel format.

An unusual and discomforting year is coming to its end. The fact that you read this edition of the GNN Monthly demonstrates, however, that we as a science community won't surrender. We will overcome this crisis. Uli Katz as chair of the GNN board and me (Christian Spiering) as the editor  of GNN Monthly wish all readers a peaceful and healthy New Year and look forward to meet again in person as soon as this is possible again.