From the Heart of the Reactor

From the Heart of the Reactor 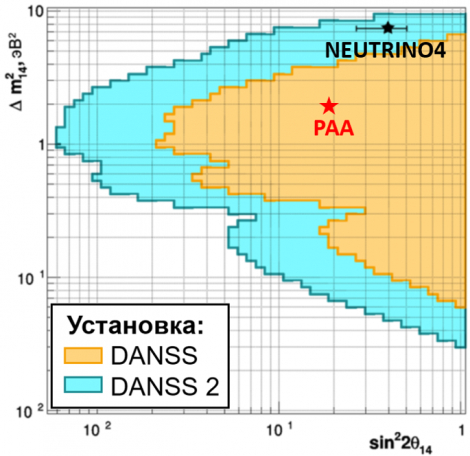 The problem of sterile neutrinos is not extraordinary for physics. There was a time when the solar neutrino deficiency was explained through the existence of these particles. However, their possible detection in nuclear reactor experiments is a quite fresh idea. The team of the Experimental Department of Nuclear Spectroscopy and Radiochemistry at DLNP, JINR, is the leader in the research of this kind.

Studying the physical neutrino processes in an operating power nuclear reactor is not only of scientific but also of absolutely practical value. Neutrinos with their great penetrating ability enable the direct observation of the “heart” of the reactor. And a more comprehensive understanding of the processes inside the reactor can help to increase nuclear fuel efficiency using a spatial pattern of its burning. For this reason, of great importance are calculation and experimental measurement of spectral characteristics of decay products, and, particularly, determination of the energy spectrum of emitted neutrinos.

In 2011, French researchers revalued the reactor antineutrino spectrum using new knowledge about the physics of this process with a precision of 3%. The comparison of the calculated spectrum with that from the experiment demonstrated the difference at the level of 10%, which can be explained only through computational errors.

The authors assumed that one of the possible reasons of this discrepancy could be the existence of a new type of neutrinos into which neutrinos from fission processes transform (oscillate). At present, three types of active neutrinos are known (e, μ, τ — electron, muon and tau neutrinos), and the accelerator experiments showed that there cannot be more of them. Therefore, if one more neutrino exists, it can be only sterile. As you know, an ordinary neutrino interacts only weakly (gravitation in the microworld is negligible), and there is no interaction of this kind in the above-mentioned case. And this property is standardly called “sterility”. In such conditions, oscillations become the only effect which can help to discover a particle of this kind. The problem, widely known nowadays as “Reactor Antineutrino Anomaly” (RAA), caused a hectic experimental activity with the goal of verifying it since the sterile neutrino discovery would be a fundamental breakthrough in particle physics.

Anticipated parameters for this hypothetical particle (RAA best fit), a mixing angle between an ordinary and a sterile neutrino (affecting the oscillation amplitude) and the mass-squared difference between the active and sterile neutrino states (affecting the oscillation frequency), turned out to be of that nature when transformations of reactor active neutrinos into sterile ones should occur at very short distances, 5 to 15 m between the reactor and the detector.

The research group from DLNP, JINR, engaged in the neutrino experiments at the Kalinin Nuclear Power Plant, was fortunate that the DANSS facility (Detector of AntiNeutrinos based on Solid state Scintillator), installed at that time to monitor the power reactor, was placed at a suitable distance from the centre of the reactor core (the range of possible positions can vary from 9.6 m to 13.7 m). Moreover, this distance could be changed due to the movable system which the facility was based on. The latter factor allowed avoiding absolute values in the analysis, in particular, the calculated reactor antineutrino spectrum, because it is important in this case to measure only the compliance of the neutrino flux alteration with the inverse square law. In addition to a favourable location, solid scintillator as a working medium provides another advantage which facilitates experimental arrangements at the nuclear power plant. It would be enough to mention that the majority of liquid scintillators are combustibles, which, considering safety rules, complicates their usage at an industrial nuclear object and maybe even completely excludes this option when the experiments are conducted in the immediate vicinity of the reactor core. 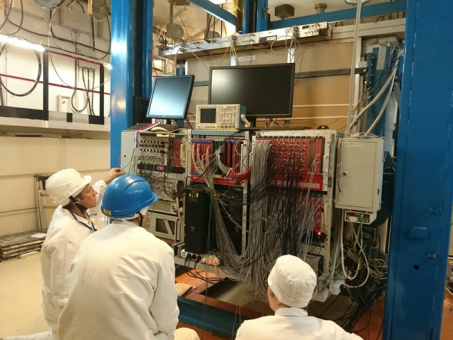 The effective volume of the DANSS facility is one cubic metre. It is made up from scintillator strips with the size of 1 m x 4 cm x 1 m. The widely known reaction of the double beta decay is used for neutrino detection. It benefits from the accurate selection of true events from the background ones while registering two signals: a fast one, corresponding to a positron, and a delayed one, corresponding to a moderated neutron. The feasibility of the experiment was initially tested at the DANSSino prototype, and the facility fully started its measurements in 2016. To date, the gained statistics include almost four million neutrino events, approximately one million neutrinos a year. The daily detection rate is about 5000 events with the background not exceeding 2%. Such neutrino amount was never detected by any experiment before. What is more, the detection system efficiently monitors the reactor thermal capacity.

Following the experimental results, the oscillations with the RAA best fit are almost excluded. Moreover, the calculations based on the DANSS experimental data close a large parameter region of oscillations to sterile neutrinos. A large region, but not the entire one. There are quite a few blank spots left on the map of the sterile neutrino phase space. Particularly, in 2018, the NEUTRINO-4 experiment under the guidance of A. P. Serebrov (Petersburg Nuclear Physics Institute) announced the observation of oscillations to sterile neutrinos with other mixing angle and mass-squared parameters different from RAA and unfortunately beyond the reach of the DANSS spectrometer in its original capacity. Reflecting this, the question about the facility upgrade is being considered with a view to increasing the sensitivity to sterile neutrinos. After the planned two-year upgrade, the DANSS 2 will be able to reach the phase space point where according to the NEUTRINO-4 announcement the effect is observable.

The scientists from the DANSS group—V. V. Belov, V. B. Brudanin, I. V. Zhitnikov, S. V. Kazartsev. A. S. Kuznetsov, D. V. Medvedev, M. V. Fomina, E. A. Shevchik, M. V. Shirchenko, Yu.  A. Shitov—received the 2019 First JINR Prize in the section “Research Experimental Works” for “Measurement of reactor antineutrino energy spectra in the DANSS project”. JINR prizes are awarded for outstanding experimental, methodological and applied works performed at the cutting-edge of science within the JINR Topical Plan in the current year.

As a final point, we would like to mention that Vyacheslav Georgievich Yegorov was a soul and a driving spirit of the above experiment for many years. He unexpectedly passed away last July. His devotion to work continues inspiring all of us, and we are still missing his experience, knowledge and warm encouragement.