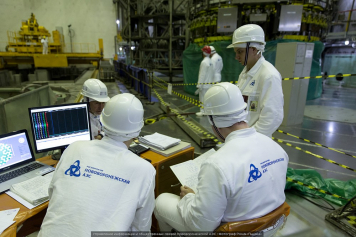 Neutrino experiments at nuclear power plants are among the promising directions in particle physics. They do not require a great budget, and can solve topical experimental problems from these in astrophysics to those in applied research. Nuclear reactors have long been used for studying neutrinos, and they still remain the most powerful electron antineutrino sources on the Earth. Nuclear reactors made it possible to experimentally detect neutrinos themselves, prove solar neutrino oscillations, and discover the electron-to-tau neutrino oscillations. Recently, studies of coherent elastic neutrino scattering off nuclei have been of great interest.
One of the projects in which DLNP participates is the international Ricochet project aimed at the search for coherent neutrino scattering using bolometers. In January-February 2020, the staff members of the Experimental Department of Nuclear Spectroscopy and Radiochemistry under the guidance of Evgeny Yakushev explored background conditions at the Novovoronezh Nuclear Power Plant (NPP) to consider the possibility of implementing the project on the study of neutrino properties. An article about this preliminary survey at the Novovoronezh NPP was published on the website rosenergoatom.ru. You can find the article below.
Innovative Power Unit #6 at the Novovoronezh NPP with the VVER-1200 reactor will probably become a site for the project on studying neutrino properties. Neutrinos are the most abundant particles in the Universe, and at the same time extremely hard to detect. The project initiators are physicists from the Joint Institute for Nuclear Research (Dubna, Moscow Region). For fundamental science, the study of unique neutrino properties is a key element in understanding basics of physics and the formation of the Universe. Also, neutrino research is crucial for nuclear physics. In future, it could be used as a tool for remote nuclear reactor monitoring.
For a month, a group of physicists from Dubna, along with the Novovoronezh NPP staff both from the Department of Nuclear Safety and Reliability and from the Unit of Thermal Automatics and Measurements, performed preparatory work measuring background events in the rooms of Power Unit 6 to analyze the possibility of future neutrino studies at the Novovoronezh NPP.
“We have found out that one room has low background conditions, eminently suitable for studying neutrino properties, and they are among the best in the world. Reactor structural materials themselves provide a great shield against cosmic radiation. There is no effect on the radioactive background from the nuclear reactor. The cosmic muon flux is seven times smaller than on the surface, the thermal neutron flux is 33 times smaller, and that of fast neutrons is 25 times smaller than in an ordinary room beyond the plant”, explains the senior researcher of the Joint Institute for Nuclear Research Alexey Lubaschevsky.
The measurements conducted at the Novovoronezh NPP allow the physicists from Dubna to determine the exact room parameters for the future research, as well as to help elaborate a special facility with cutting-edge bolometers. The decision about further work and the final choice of the site for the major part of the research will be made by the scientists after thoroughly analyzing all the gained data. In their opinion, the most promising site is nowadays the Novovoronezh NPP.
“The research data are important. The cooperation of the Novovoronezh NPP staff and the Dubna physicists will help train highly-skilled experts not only for Russian physics education but also for applied fields of science. We are going to involve into this process our colleagues from the Nuclear Physics Department of Voronezh State University”, says the Chief of the Department of Nuclear Safety and Reliability at the Novovoronezh NPP Evgeny Golubev.