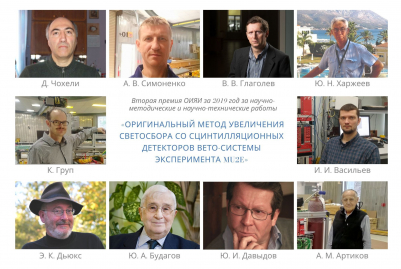 The Second JINR Prize 2019 for "Methodological and Technological Research Work" was awarded to the scientists from the Mu2e experiment for “Innovative method for increasing light collection from scintillation detectors of the Mu2e veto system” according to the decision of the JINR Scientific Council within its 127th session. The members of the Mu2e group are A.M. Artikov, Yu.A. Budagov, I.I. Vasilyev, V.V. Glagolev, Yu.I. Davydov, A.V. Simonenko, Yu.N. Kharzheev, D. Chokheli, E. K. Dyuks, K. Grup.

The JINR Prizes are awarded for outstanding advanced experimental, methodological and applied research carried out in accordance with the JINR Topical Plan and completed in the current year. Every year, the Jury of 11 people, including the secretary, is appointed by the JINR Directorate to judge the candidate research projects. This body comprises some representatives from the JINR Directorate, as well as leading scientists. The decision about awarding goes into effect after the approving procedure by the JINR Scientific Council within its Winter Session.

The Mu2e experiment being a part of the Fermilab muon accelerator programme searches for New Physics. The goal of this experiment is to discover a direct muon-to-electron convertion in the nuclear field µ-+N → e-+N. The process of this kind involves the leptonic number violation for leptons with nonzero charge. Within the Standard Model, its probability is extremely small (~10-50), and it is almost unobservable. The observation of such a process unambiguously indicates interactions beyond the Standard Model. In many models of New Physics, the probability of these processes substantially increases and, therefore, allows their observation. The Mu2e facility construction is underway. Its test start-up is planned by the end of 2020. The first phase of data acquisition is scheduled for 2012—2023. The Mu2e sensitivity to a single event of a direct muon-to-electron conversion is expected at the level of ~ 2.9х10-17, which is three times better than the recent results.

We heartily congratulate our colleagues on receiving the Prize and wish them all the best and new heights of success!