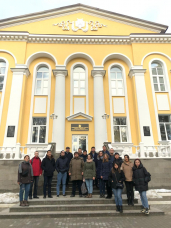 From 13 February to 14 March 2020, the International Innovative Nanotechnology Centre of the CIS countries along with JINR offers the Internship for Young Scientists from the CIS countries. Within the training programme, all JINR research divisions will be introduced to the participants. The Internship aims to ensure active involvement of young scientists into the cooperation with the JINR laboratories, innovative development of our Institute and further employment of young researchers from the CIS countries at JINR. Today, the interns have visited our laboratory. Oleg Smirnov delivered the lecture “Neutrino Programme at DLNP, JINR”.

The trainees were taken on a guided tour of the DLNP Medical Technology Complex by Aleksey Valeryevich Agapov. He talked about the proton therapy for cancer treatment, as well as about the origins of the synchrocyclotron at JINR. Oleg Yuryevich Smirnov delivered the lecture “DLNP Neutrino Programme”.

Mikhail Vasilyevich Lyablin toured the participants around the Laboratory of Precision Laser Metrology, presented them a high-precision new generation device, the Precision Laser Inclinometer. He also explained its application to stabilize the beam orientation, which aims at the luminosity increase at the Large Hadron Collider. He mentioned the tasks of earthquake forecasting and angular seismic activity monitoring at the VIRGO Interference Gravitation Antenna Site as well.

Aleksandr Igorevich Antoshkin spoke about the NOvA Remote Control Station, the first station fully certified outside the US. Aleksandr Sergeevich Selyunin demonstrated the Meissner effect (magnetic levitation above the superconductor) and explained the basics of the Wilson chamber.

The visit to the Photodetector Testing Laboratory concluded this introductory tour. Nikolay Vladimirovich Anfimov informed the interns about the experiments being performed in particle physics (JUNO, NOvA, COMPASS, DUNE (ArgonCube)) and about the creation of required detectors. He also showed the Dark Room where the method of testing large PMTs for the JUNO experiment was worked out, told the visitors about the development of the DUNE system for light detection in liquid argon, showed the test bench to check the NOvA electronics and avalanche photodiodes and demonstrated the structure and operating principles of an electromagnetic calorimeter used in the COMPASS experiment.