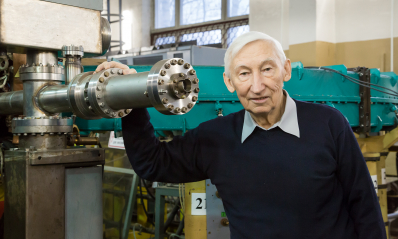 This week, new members of the Russian Academy of Sciences were elected. The title of the RAS Academician was awarded to a senior researcher of the Electron Cooling Sector of our Laboratory, a RAS corresponding member, Professor Igor Nikolayevich Meshkov.

Igor Nikolayevich Meshkov is a world-famous scientist in the field of charged-particle beam physics, accelerator physics and equipment, high-energy physics, plasma physics and radiation methods of material treatment. He became renowned for the discovery and development of the electron cooling method. He first began his studies at the Institute of Nuclear Physics of the Siberian Branch of the Russian Academy of Sciences (SB RAS) where he grew from a senior lab assistant to the head of the laboratory. His investigations were continued both at the SB RAS Centre of Physics and Technology established under his leadership in Lipetsk and at the Joint Institute for Nuclear Research in Dubna.

His ideas and inventions are still in use within charge-particle storage rings with electron cooling at different facilities. He participated in the development of the electron cooling system and in the experiments at the LEAR antiproton storage ring at CERN (Switzerland), at Fermilab (US), at the COSY synchrotron at the Research Centre in Jülich (Germany), and at the HIMAC medical synchrotron in Japan. For his pioneering studies in the area of cooling, I.N. Meshkov was awarded the State Prize of the Russian Federation.

Under his leadership, cutting-edge technologies with charged-particle beams for the metallurgy industry were elaborated; a series of experiments on the radiation-chemical purification of gases by their exposing to electron beam irradiation was conducted; investigations in physics of beam-plasma discharge were carried out, including the electron beam injection into the ionospheric plasma within spacecraft experiments using the on-board accelerator.

The NICA project of the unique superconducting heavy-ion collider, the applied and fundamental accelerator facilities like the LEPTA positron storage ring and the IREN resonance neutron source are being advanced at JINR under the scientific guidance of I.N. Meshkov.

His contribution to Russian and world science was marked by the prestigious State Prizes, the Award of the European Physical Society “For outstanding research contributions to the area of particle accelerators”. In 1991, I.N. Meshkov was elected a correspondent member of the Russian Academy of Sciences; in 1995 – an Academician of the Academy of Electrotechnics. For many years he heads the Scientific Council of the Nuclear Physics Section on Particle Accelerators.

The colleagues from the Dzhelepov Laboratory of Nuclear Problems heartily congratulate him on becoming a full member of the Russian Academy of Sciences and wish him good health and every success!