Our congratulations to Fyodor Shimkovits on his 60th jubilee!

Our congratulations to Fyodor Shimkovits on his 60th jubilee! 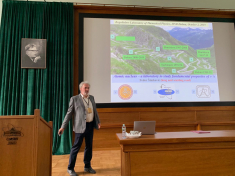 Slovakia is a picturesque country, surrounded by mountains and crossed by rivers springing in the Carpathian. Slovakia gave birth to many great people, such as Andy Warhol – the Pop-Art creator, or Žigmund Pálffi – the ice hockey player of both the national team of Slovakia and “Los Angeles Kings”. The today’s jubilarian – Fyodor Shimkovits – presents the scientific branch of the Slovak team of eminent persons.

Fyodor rushed into the scientific elite from the left flank to the very middle of the scientific life - to the town of scientific feats and technological progress, to Dubna. In the pairing with Samuil Michelevich Bilenky, with other physicists, or alone he scored many goals in scientific journals all over the world. He became famous.

While the whole world was moving slowly towards the nanoparticle research, Professor Shimkovits burst rapidly into the high league and opened a neutrino physics laboratory, right away on a femto scale. He has tamed the nucleus, which revealed to the scientist its secrets. Here, at this laboratory, the Professor carried out his neutrino experiments, which remained obscure to an average man in the street.

They say, while working at his secret laboratory and thinking about Majorana neutrinos that can move simultaneous forward and back in time, Doctor Shimkovits learned to control the time. This is the best explanation of his blooming appearance that conflicts with his age.

Fyodor Shimkovits is an outstanding person in theoretical physics, dominating the average. Everyone in the canteen queue can get this statement proved.
Only a few people know that the Japanese physicist Tomonaga, who worked at the Laboratory of Nuclear Problems as a research assistant and who was impressed by the great personality of Fyodor, wrote once a haiku. We have traced that rare text. It is real pleasure for us to quote it here.

Fyodor Shimkovits is a teacher and an interpreter of science to the public. His students can do everything – write equations, chop ice on Baikal, initiate cheerful scientific events.
Congratulations and best wishes from all the staff members of the Laboratory of Nuclear Problems! We are happy to be both friends and colleagues with the prominent Slovak theoretician – Doctor Fyodor Shimkovits!

The JINR Directorate and the DLNP staff members