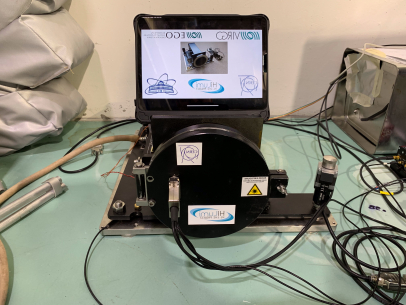 On 5-15 August 2019, the Precision Laser Inclinometer (PLI), an innovative instrument for monitoring angular microseismic activity, was installed and put into operation on the VIRGO Interferometric Gravitational-Wave Antenna (IGA) premises by a group of scientists including B. Di Girolamo (CERN), M.V. Lyablin (JINR), and N.S. Azaryan (JINR). The PLI will help reduce the effect of angular microseismic ground inclinations on the IGA sensitive elements, which will improve the IGA sensitivity in the range of frequencies corresponding to the merging of black holes and neutron stars in the universe.

VIRGO, the European gravitational-wave detector, one of the European mega science projects with France and Italy at its origin, which now involves some 400 scientists, is located near the city of Pisa, Italy. Gravitational waves were predicted by Einstein in 1916, their search began 50 years later, and a few decades had to pass before they were discovered. It was only in September 2015 that two detectors of the Laser Interferometer Gravitational-Wave Observatory (LIGO) in the United States detected a burst of gravitational waves produced by two heavy black holes merging about 1.3 billion light years away from the Earth. But it is important not only to detect the gravitational wave burst but also to understand from where the signal comes in each particular case. That is why VIRGO, despite its slightly lower sensitivity than that of LIGO, plays a significant part in finding the source of a new burst.

The main part of the VIRGO detector is the Michelson laser interferometer with the 3-km-long arms. The band width of the VIRGO detector together with its sensitivity allows hope for detecting gravitational radiation from supernova explosions and binary star system merging in our galaxy. A unique high-power ultrastable laser source, highly reflecting mirrors, seismic isolators, and position and direction controllers were developed for VIRGO to obtain the necessary sensitivity. However, VIRGO sensitive elements still need seismic isolation. These are first of all the interferometer mirrors, the divider plate, the system of mirrors to prepare the laser beam for the interferometer, and additional mirrors for laser beam re-cycling in the interferometer. Totally, up to ten sensitive elements must be seismically isolated from the angular oscillations of the Earth.

Now the gravitational-wave antenna operates under intense microseismic noise, which impairs its sensitivity in the frequency range of 1 to 10 Hz.

The Precision Laser Inclinometer detects time dependence of inclination angles and is structurally free of resonance phenomena. This allows the device to be used in systems for online stabilization of the optical platform against angular microseisms, which is the major concern of the VIRGO people.

Indeed, inclinations of the interferometer mirror base caused by angular microseisms result in the inclination of the mirror suspension point, which leads to its displacement by a few micrometers in the interferometer’s arm. Since this displacement of the suspension point occurs periodically, it additionally leads to parametric excitation of mirror suspension oscillations at resonance frequencies in the direction of the interferometer’s arm as well. All these oscillations are unpredictable, and their amplitude can be reduced only by rigidly fixing the mirror suspension base in the horizontal position. This is the priority task to be fulfilled with the PLI integrated into the VIRGO IGA system.
The idea of using the PLI in the VIRGO IGA system was put forward by V.A. Matveev, who suggested that Yu.A. Budagov should come into contact with the Astroparticle Physics European Consortium (APPEC) to consider the possibility of using the PLI for improving the gravitational-wave detector sensitivity. The first contacts with the management of the European Gravitational Observatory (EGO) were organized by Beniamino Di Girolamo. The EGO Deputy Director Fulvio Ricci visited CERN and looked over the Precision Laser Inclinometer installed in CERN Transport Tunnel #1. Then, with the aid of EGO, CERN and JINR, the PLI was transported and installed near one of the VIRGO IGA mirrors. The PLI readings will be compared with the readings of the operating seismometers for six months. On the basis of the measurements, a decision will be made as to the possibility of using the PLI for seismic isolation of sensitive elements of the gravitational-wave antenna.
The first results showed that the PLI detects angular microseismic phenomena with a sufficient sensitivity and in agreement with the readings of the nearby seismometers, which indicates that the PLI data are free of system errors.
The history of the PLI began at the DLNP Research Department of Multiple Hadronic Processes under the supervision of Prof. Yu.A. Budagov in 2010. The work was carried out within the JINR–CERN agreement for the purpose of stabilizing the spatial position of the beams in the LHC to increase its luminosity (in the ATLAS experiment). The first prototypes of this unique angular seismometer were assembled and investigated. The investigations showed that we dealt with a new breakthrough method of detecting angular microseismic ground oscillations. As a result of the investigations, Yulian Aramovich Budagov and Mikhail Vasil’evich Lyablin acquired RF Patent RU2510488 C2 dated 30.05.2012. Development of the method lead to development of an automated remotely tuned device capable of efficiently detecting temporal variation in angular inclinations of the Earth’s surface with a sensitivity of 2.4 10-11rad/Hz1/2 in the frequency range of 10-3-12.3 Hz.

At that time, the main objectives were also determined for this unique device:
- Measurement of microseismic angular oscillations of the Earth’s surface. This is a source of substantially new information on geophysical processes inside the Earth.
- Use of long-time measurements of angular ground inclinations for earthquake predictions. This allows seismic energy accumulation areas to be determined and thus the power and the time of the future earthquake to be quantitatively calculated.
- Use of detected angular microseisms for stabilizing large physical facilities. At CERN, preparation is underway for detecting ground deformations when surface microseismic waves pass the LHC site.
- Construction of a seismically isolated optical platform for physical research under reduced angular microseismic noise.
The work on angular seismic isolation of the VIRGO IGA active elements implies development of the facility upgrade project. To this end, investigations should be carried out with the prototype platform seismically isolated from angular ground motion and then, on the basis of the results achieved, angular seismic isolation elements for the mirrors, divider plate, and other VIRGO IGA sensitive elements should be designed, fabricated, and installed.
The work is at its very beginning, but even now there is confidence that the PLI will make it possible to reduce the effect of angular microseismic oscillations at frequencies of 10-3-10 Hz on the sensitive elements of the VIRGO IGA by two orders of magnitude, which will undoubtedly have a positive impact on its sensitivity.
The Precision Laser Inclinometer is a prominent example of how practical use is made of achievements of basic science. It has come full circle, being conceived within the then most advanced basic-science experiment ATLAS, passing the stage of being an applied instrument, and coming back to the realm of basic science with a promise of increasing the LHC luminosity and the VIRGO sensitivity and with a unique potential of applications for the benefit of mankind. This is the merit of our scientists and engineers working at the Dzhelepov Laboratory of Nuclear Problems, JINR.
The authors of the project are grateful to Viktor Anatol’evich Matveev and Vadim Aleksandrovich Bednyakov for their comprehensive help. 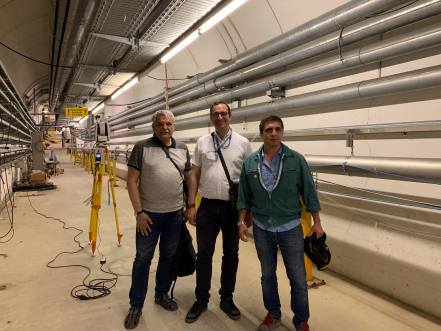 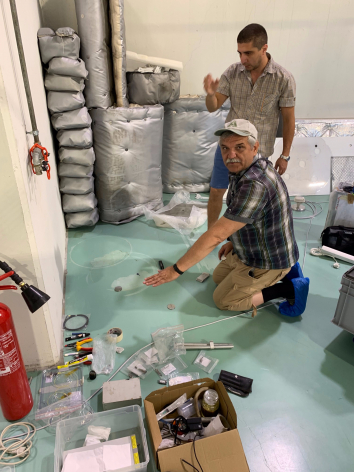 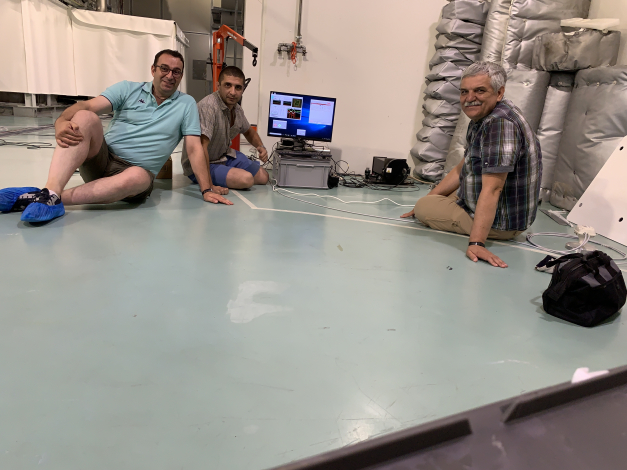