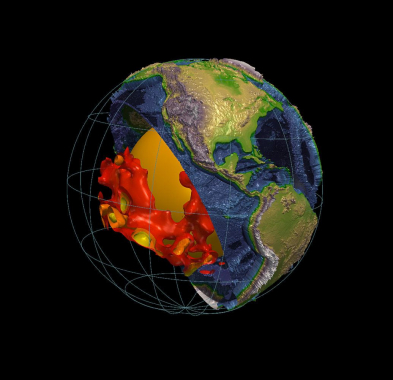 The review of experimental neutrino geophysics by the DLNP senior researcher Oleg Smirnov is accepted for publication by “Progress in Particle and Nuclear Physics”. Electronic version is available online under the following link: https://doi.org/10.1016/j.ppnp.2019.103712.

Experimental aspects of the geoneutrino detection are discussed in the review, including detailed analysis of the current methodology of antineutrino detection in the reaction of inverse beta-decay on the free proton (IBD); detailed discussion of possible background contributions in the observed IBD signal and the methods of their suppression. Status and perspectives of antineutrino detection methods are presented, including those aimed at the detection of potassium-40 contribution that was not previously observed because of high threshold of the IBD reaction. The possibility to use the direction of geoneutrino response to extract the mantle data is considered.

Neutrino geoscience, a new field of science rapidly developing as a synergy between geology, geophysics and particle physics, studies the Earth’s interior by measuring the geoneutrino fluxes at its surface. Geoneutrinos are antineutrinos produced in radioactive decays of elements from the chains of uranium and thorium radioactive decays, as well as of potassium-40 and rubidium-87 in the Earth’s crust and mantle. Decays of radioactive elements are significantly contributing to the planet heat, and they are essential for geology. The total heat flux calculated using measurements in different locations on the Earth is approximately 50 TW. The released heat causes convective flows in the fluid Earth’s mantle, the former affects volcanic activity and tectonic plates movement, and therefore, seismic activity of the Earth’s crust. Terrestrial magnetic field, explained by geodynamo mechanism, is also caused by the heat production in the planet depths. Hence, radiogenic contribution to the total heat production in the Earth is an important quantity characterizing the thermal history of the planet, and, thereafter, restricting geophysical models of the Earth.
Heat production in radioactive decays is accompanied by neutrino emission, therefore, the geoneutrino flux measurements will indirectly help to define the radiogenic contribution to the total heat generated by the Earth.
The first realistic estimate of the geoneutrino flux was provided in the paper of Hungarian physicists G.Marx and N.Menyhárd in 1960. The significance of geoneutrino study in connection with the heat release of the Earth was pointed out by G. Eder; another paper by G.Marx devoted to neutrino geophysics appeared in 1969. The modern theoretical study of geoneutrinos started with the paper of L.M.Krauss, S.L. Glashow and D.N.Schramm in 1994. The first experimental indication of geoneutrino presence was announced in 2005 by the Japan-American KamLAND collaboration on the basis of data obtained with the detector in the Kamioka mine in Japan. The first statistically significant evidence of a non-zero geoneutrino flux was presented by the Borexino collaboration in 2010.
Nowadays the precision of the geoneutrino flux measurement is still too low for reliable discrimination of geophysical models. Dominant contribution to the geoneutrino flux at the Earth’s surface is provided by antineutrinos emitted from the crust. It can be predicted using the composition of the Earth’s crust available for the direct measurements. The difference between the total measured geoneutrino flux and the predicted flux from the crust can be assigned to the mantle contribution, which is sensitive to models. Statistical subtraction of two close values results in the low significance of the extracted mantle flux. The data from several detectors with the potential of Borexino in different geographical locations are needed to examine in more details the contribution of radioactive elements from the mantle to the total Earth heat. The methodology developed and proved with Borexino has already launched some new large-scale experiments up to tens of kilotons focused on the geoneutrino detection, such as the facility JUNO in China. Among other proposals the construction of the geoneutrino detector in the underground laboratory at Baksan, Russia, is being discussed.

The image above, created by Ed Garnero from Arizona State University, presents the internal structure of the Earth. More than 30 years scientists are aware of two massive, continental-sized anomalies in the deepest mantle rock (see the red area). Geoneutrino flux study can provide clues about the origin of these mysterious blobs in the Earth’s interior.