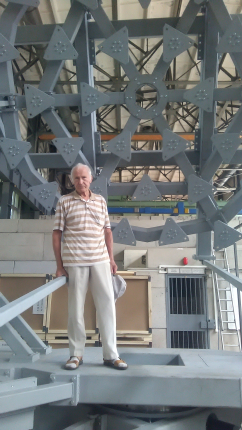 He began to work at JINR in 1963 as a postgraduate attached to the Laboratory of Theoretical Physics, and in 1966 he took the position of a researcher at the Laboratory of Nuclear Problems. He actively participated in the preparation of the large-volume liquid-hydrogen chamber project and then was engaged in theoretical and methodological investigations into the operation basics of the ultrasound bubble chamber. In 1972, based on the results of those investigations, L.G. Tkachev successfully defended the Candidate of Sciences dissertation.

Over that time, he grew into a highly skilled specialist capable of solving complicated scientific, technological, and organizational problems. In 1975–1984 he worked at the RISK facility and made a substantial contribution to the analysis of the experimental data and development of several key units, such as the gas system, readout system, and some others. In addition, he contributed to the successful organization of the international team’s work at all stages of preparing and conducting the experiment at the RISK spectrometer at the IHEP, beginning with the design of the spectrometer and ending with the analysis of the data.

In 1986–1992, L.G.Tkachev was a co-leader of the KOKOS project, a satellite-based line of communication between JINR and Western research centres.

Since 1984,he participated in the DELPHI collaboration. In 1986–1987 and 1993–1997, he was appointed the head of the JINR team at CERN and worked together with his colleagues on the mounting of the modules, assembly, and commissioning of the DELPHI hadronic calorimeter and data acquisition and analysis.

At present, he is an active participant in the NUKLON, TUS, and TAIGA (Tunka Advanced Instruments for Gamma Astronomy) collaborations and the leader of the theme “Astrophysical research in space experiments”. Thefirsttwoexperimentsaresatellitebased. The satellite with the equipment for the NUKLON experiment was launched from the Baikonur Cosmodrome on 28 December 2014.  On 28 April 2016, the Lomonosov satellite with the TUS detector was launched from the Vostochny Cosmodrome.

The NUKLON experiment is aimed at studying the spectrum and elemental composition of cosmic rays in the kink region (1012-1015 eV).

The goal of the TUS experiment is to measure the spectrum of ultrahigh-energy cosmic rays (UHECRs), its composition, and angular distribution in the GZK (Greisen–Zatsepin–Kusmin) cut-off region, i.e., at energies above 1019 eV.

Now the data of both experiments are being analyzed, and TAIGA data acquisition successfully goes on.

Leonid Tkachev is a highly skilled physicist with a remarkable theoretical background and his characteristic wideness of scientific interests, independent and initiative approach to formulation and solution of problems, dedication to science, selfless attitude to work, and team spirit. He is an author of over 400 scientific papers, many of which were reported at international conferences.