Winners of the 2019 Breakthrough Prize in Fundamental physics

Winners of the 2019 Breakthrough Prize in Fundamental physics 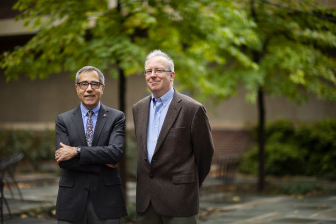 Yesterday, on 17 October 2018, winners of the Breakthrough Prize 2019 in Life Sciences, Fundamental Physics, and Mathematics were announced.The Breakthrough Prize 2019 in Fundamental Physics was awarded to Charles Kane and Eugene Mele from University of Pennsylvania “for new ideas about topology and symmetry in physics, leading to the prediction of a new class of materials that conduct electricity only on their surface.”

The Breakthrough Prizeis sponsored by Sergey Brin, Priscilla Chan and Mark Zuckerberg, Ma Huateng, Yuri and Julia Milner, and Anne Wojcicki. The winners are chosen from the list of nominees by the committees of previous Breakthrough Prize laureates. Each laureate receives \(3 million in prize money. In addition to the seven main-stage prizes, six New Horizon Prizes,worth \)100,000 each, will be awarded.

These prizes are for promising young researchers in physics and mathematics.Also, the Special Breakthrough Prize in Fundamental Physics is awarded to British astrophysicist Jocelyn Bell Burnell for her fundamental contributions to the discovery of pulsars.

The Breakthrough Prize ceremony, or the “Oscars of Science,” is annually held to recognize the outstanding achievements of the laureates, attract additional support for researches, and inspire the new generation of scientists. This year it will be held on Sunday, November 4, and will be broadcast live on Nat Geo, YouTube, and Facebook Live from the NASA Ames Research Center in Mountain View, California.