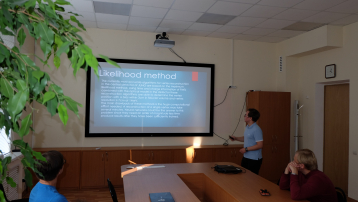 Another seminar was held within the JINR Summer Student Programme today. Dmitry Selivanov (St. Petersburg State University, supervisors Konstantin Treskov and Maksim Gonchar) spoke about the reconstruction of the primary interaction vertex in the JUNO central detector using neural networks. Two methods for solution of this problem are proposed, one using a convolutional neural network and the other using a direct-propagation neural network.

Modern modifications and learning algorithms of convolutional neural networks in regression problems were considered. A method for transforming data to the form suitable for neural network learning and its prospects for the interaction vertex reconstruction in the JUNO experiment were described.