If your parents and grandparents worked at JINR in the last century, you surely happened to hear about fascinating and creative activities kept humming in the scientific community outside work. As we see it, the distinctive feature was that in the absence of gadgets, YouTube, and quizzes with professional hosts, they had to organize their leisure time using their own resources. Physics are lyrics? Yes.

Scientists were constructors of their own creative leisure time. In 1984, a song performance (now it would be called a musical) “The Sorrows of Young Vector” was given in the House of Culture “Mir”. Georgy Aleksandrovich Shelkov, one of the participants—an “actor”—in the performance, has kept photos, which he handed to us.

It was a story about the life and misadventures of a young researcher Vector, who just started his carrier at JINR.
The authors of the idea, libretto, verses, and songs were Vladimir Lyukov and Anton Volod’ko with active participation of Yuri Gornushkin and Mikhail Bilen’ky. Other actors, in addition to the authors, were Sergey Zinkevich, Natalia Negovelova, Georgy Shelkov, Mikhail Bunin and others.

Georgy Aleksandrovich remembers that rehearsals were attended by the deputy secretary for ideology of the JINR committee of the CPSU, who watched that the participants did not play tricks. He had the power to change the plot and lines and even to forbid the performance.

However, the rehearsals passed successfully, and the performance was given to a wide audience. Half of the LNP staff together with Director Venedikt Petrovich Dzhelepov were in the hall of the House of Culture “Mir”. And after the performance there was a traditional “tea” party for the guests and the actors.
If you recognized yourself or your relatives and acquaintances in the photos, please write a comment and share your recollections! 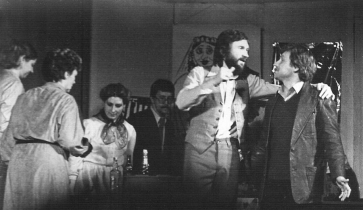 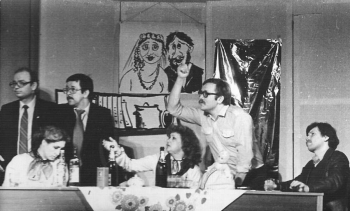 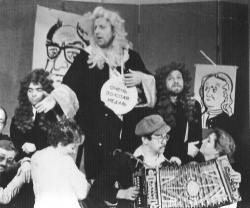 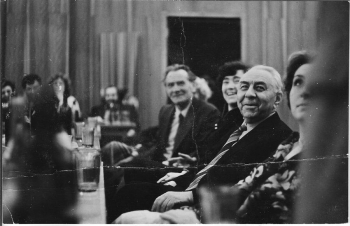