There is an old joke about a gentleman who delicately forces his late guests to leave offering them to have a look at other seventeen family photo albums from ceiling shelves.

A photo album is a top which can be reached not by all printed photographs. They were often kept randomly in photo paper envelops in the best case with a note: “Trip to aunt Nina, August 1967”.
People sometimes spared no efforts and captioned each and every photograph. Now, it is a real pleasure to turn over an old black-and-white card and find a caption “Katya, Petya, mummy and daddy, July 1972, Alushta”.

Images were stored not only on paper but also as slides. The latter were mainly used for colour photographs. To view slides, you needed a special device, a slide projector. Then a relaxed evening ceremony with a bedsheet instead of the screen could happen attended by family and friends sharing their memories and stories.

However, photographs are not always a family story. Sometimes, they are a history. At JINR, for example, there is a huge archive of photos and slides which depict employees, working processes and moments, scientific facilities, memorable events and even particle tracks. The major part of images has been already digitized, and the best paper photographs decorate the Laboratory hall and rooms.

By the way, slides were presented to a wide audience, for instance, at meetings of the JINR Tourist Club after summer holidays. Have you ever attended them?

In the photo: Photo albums from the Museum-Study of Bruno Pontecorvo (DLNP, JINR). 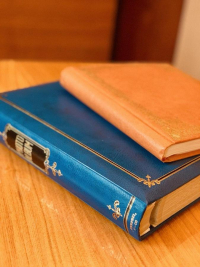 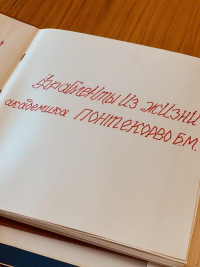 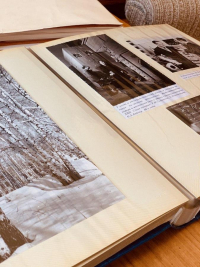