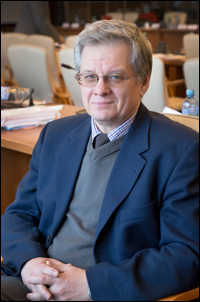 October 31, 2017 marks the 60th birthday of Prof. V.A. Bednyakov, Director of the Dzhelepov Laboratory of Nuclear Problems, Doctor of Sciences (Physics and Mathematics), coordinator of JINR participation in the physics programme at ATLAS, and author of a number of popular-science articles.

Scientific interests of V.A. Bednyakov are quite wide, embracing elementary particle physics and physics of neutrinos and rare processes, where he carries out successful studies. One of his main research topics is detection of dark mater particles in laboratory experiments. Together with S.G. Kovalenko, he actually laid down a theoretical basis for these researches at JINR. Now he is a leading expert in this field in Russia. Another important line of his research is the search for manifestations of physical phenomena beyond the Standard Model that may allow observing supersymmetry both at extremely high collider energies and in low-energy processes and astrophysics. In 1999, on the basis of the works in those two fields, V.A. Bednyakov defended his doctoral dissertation “Investigation of a possibility of observing supersymmetry in rare processes in cosmology”. His works on detection of galactic dark matter particles on the Earth and in space are widely known not only in Russia but also in the world.

After his election as DLNP Director in 2013, V.A. Bednyakov formulated the main points of the new JINR Neutrino Programme, which brought the currently topical researches in neutrino physics and astrophysics to the leading position in the JINR research programme. Within this Programme, a new basic facility at JINR became a deep underwater neutrino telescope al Lake Baikal ((BAIKAL–GVD project), supported by scientists of DLNP and JINR as a whole.

In 2014, under supervision of V.A. Bednyakov, the DLNP Directorate launched major reconstruction of the DLNP infrastructure, including planned renovation of buildings and structures and technical re-equipment (machine-tools, instrumentation, etc.).

V.A. Bednyakov is a member of the Organizing Committee for a series of international conferences on new physics in non-accelerator experiments (NANP) and the editor-in-chief of their Proceedings. He is also a member of the editorial boards of the journals Nuclear Physics and Physics of Particles and Nuclei, a referee in a number of prestigious international scientific journals, and an expert of the RFBR and RSF.

V.A. Bednyakov is a member of the Dissertation Councils of DLNP (since 2000) and BLTP (2002–2007). He also takes part in the activities of the Science and Technology Councils of DNLP and LHEP (till 2014) and the Commission for the Academician B. Pontecorvo Prize for Young Scientists of DNLP. He is the Secretary of the JNR Jury for Awarding the V.P. Dzhelepov Prize and the Secretary of the Neutrino Council of the Russia Academy of Sciences.