Academician V.A. Matveev is awarded the Order “For Services to the Fatherland” III degree

Academician V.A. Matveev is awarded the Order “For Services to the Fatherland” III degree 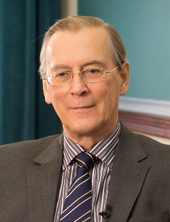 By the Decree of the President of the Russian Federation of 2 November 2017 No. 531, Academician V.A. Matveev, Director of the Joint Institute for Nuclear Research, is awarded the Order “For Services to the Fatherland” III degree for the great contribution to the development of science, education, and training of skilled specialists and many-year dedicated work.

The Dzhelepov Laboratory of Nuclear Problems congratulates Viktor Anantolyevich on being awarded this high state order and the rank of Officer of the French National Order of Merit!

The Order “For Services to the Fatherland” is a state decoration of the Russian Federation awarded for outstanding contributions to the state associated with the strengthening of Russian statehood, social and economic development of the state, advances in culture and arts, sports, peace, friendship and cooperation between nations, and for contributions to the defence of the state. Itsmottois “Benefit, Honour, Glory”.

The insignia of the Officer of the National Order of Merit was conferred on V.A. Matveev in the French Embassy of France in Moscow on 31 October 2017. The National Order of Merit was established by the Decree of the President of France General Ch. de Gaulle of 3 December 1963 and replaced numerous ministerial orders of merit. It can be awarded to French citizens as well as foreign nationals for distinguished civilian and military merits. The order has five classes: Grand Cross, Grand Officer, Commander, Officer, and Knight.