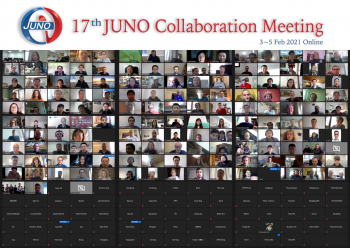 From 25 January to 5 February 2021, the 17th JUNO collaboration meeting was held. More than 200 people from 77 scientific institutions attended the online conference. Reports on detector construction and preparation of underground experimental halls were presented. Despite travel restrictions, the largest underground laboratory and all detector sub-systems are constructed with minimum delays. The detector is due to be launched at the end of 2022. Now, the collaboration is preparing the most significant stage—the commissioning of the experiment. It is expected that the detector will operate not less than 30 years. The first physical results will be obtained in a year after its launch.

The Jiangmen Underground Neutrino Observatory (JUNO) is being constructed in China, 150 km to the west of Hong Kong. The experimental hall of the JUNO facility is located at a depth of 700 m. The detector, filled up with 20 t of liquid scintillator, will use 20’ photomultipliers (20000 pcs) and 3’ photomultipliers (about 25000 pcs) for detection of antineutrino interactions released by the powerful reactor complex. An average distance between reactors and the JUNO detector is about 53 km, which ensures the maximum sensitivity of the experiment for determining the neutrino mass hierarchy, a crucial objective of the collaboration.

The Joint Institute for Nuclear Research has been involved into the JUNO collaboration for more than five years. JINR is in charge of designing the high-voltage power system for all optical modules and performing precision measurements of photomultiplier characteristics, and is engaged into development of a precision muon tracker. One of three European JUNO data storage and processing centres will be established at JINR. This centre will be also involved in design and manufacturing of the cryogenic TAO detector for record precision measurements of reactor antineutrino energy spectra, as well as in data simulation and reconstruction. JINR representatives are members of the JUNO collaboration leading boards.