Video Project “BAIKAL-GVD. Neutrino Hunters” Is a Laureate of the 2020 RAS Prize for the Best Work in Science Communication!

Video Project “BAIKAL-GVD. Neutrino Hunters” Is a Laureate of the 2020 RAS Prize for the Best Work in Science Communication! 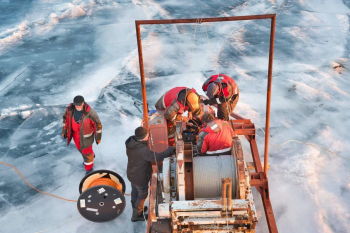 In September, the DLNP Group of Scientific Communication submitted to the RAS committee an application for the 2020 Prize for the best work. In total, 59 books, 38 lecture series and 35 video projects were nominated for the competition.

Now we have good news! Educational videos “BAIKAL-GVD. Neutrino Hunters” introduced by Academician of RAS G. V. Trubnikov on behalf of JINR were awarded the third Prize in the category “The Best Popular Science Video Series”!

The series of 11 short films tells us about construction of the Baikal Neutrino Telescope, a unique scientific facility, being a part of the Global Neutrino Network (GNN), along with IceCube, ANTARES and KM3NeT.

The telescope objectives are impressive—using neutrinos, scientists want to dive into the past of our Universe some billions of years ago, into one of the hottest epochs, the epoch of active formation of galaxies. It is amazing that we can witness this history-making evolution.

This video series is about physics tasks, the current status of the project and stunning people—scientists, engineers, workers and specialists in different professions gathered to build the engineering wonder, the largest physical facility in the Northern Hemisphere.

The Baikal Neutrino Telescope is under construction by concerted efforts of the international collaboration with a leading role of the Institute for Nuclear Research of RAS (Moscow), a founder of the experiment and of neutrino astronomy on the whole, and the Joint Institute for Nuclear Research (Dubna). The Baikal Neutrino Telescope is one of the high-priority projects in both institutes. A total of more than 70 scientists and engineers from ten research centres from Russia, Germany, Poland, the Czech Republic and Slovakia are involved.

The authors of the series:

M. V. Zhukov—cameraman and editor of all the footage of this series.

E. N. Dubovik—Candidate of Physics and Mathematics, content manager, coordinator, inspirator of this video series, Head of the DLNP Group of Scientific Communication.

Congratulations to Dmitry Naumov, Mikhail Zhukov, Elena Dubovik and also to all Baikal project members, the Group of Scientific Communication and all colleagues from the Dzhelepov Laboratory of Nuclear Problems on this victory!