Today, Professor I. N. Meshkov, an Academician of the Russian Academy of Sciences (RAS), a chief researcher of the Section of Electron Cooling of our Laboratory, turns 85! I. N. Meshkov is an outstanding expert in physics of charged-particle beams, accelerator physics and engineering, high-energy physics, plasma physics and physics of radiation methods in material processing. 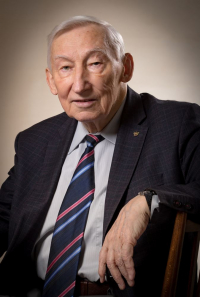 I. N. Meshkov was born on 7 January 1936 in Moscow. In 1959, he graduated from the Faculty of Physics of Moscow State University and in the same year he started his career at the Budker Institute of Nuclear Physics of the Siberian Branch of RAS in Novosibirsk where he proceeded from a senior laboratory assistant to the Head of the Laboratory. He became renowned due to the creation and elaboration of the electron cooling method. His ideas and developments are still in use at many facilities in charged-particle storage rings with electron cooling. I. N. Meshkov was involved in design of electron cooling systems at the LEAR antiproton storage ring at CERN (Switzerland), at the Fermi National Accelerator Laboratory (USA), at the COSY synchrotron at the Jülich Research Centre (Germany), and the HIMAC medical synchrotron (Japan). I. N. Meshkov was awarded the State Prize of the Russian Federation and the Prize of the European Physical Society.

In 1989, I. N. Meshkov founded a branch of the Institute of Nuclear Physics, the Physics and Technology Centre. Its main direction was development of novel technologies using charged-particle beams in metallurgical production. Also, a series of experiments on radiation-chemical gas cleaning by electron beam radiation was performed and also studies of beam-plasma discharge physics were conducted, including electron beam injection into ionospheric plasma in rocket experiments with an on-board accelerator.

In November 1993, I. N. Meshkov began his work at the Joint Institute for Nuclear Research (JINR). In 1998-2003, he was the JINR chief engineer. The project of a unique superconducting collider of heavy ions, NICA, is advancing under his scientific leadership now.

Since 1964, I. N. Meshkov has been teaching at leading institutions of higher education in Russia. Over many years, he acted as a professor and the Head of the General Physics Department at the Novosibirsk State University. Since 1989, he taught at the Lipetsk State Technical University where he took the position of the Head of the Physics Department. Since 1995, he has been teaching at postgraduate courses at the JINR University Centre where in 1998 he founded the Department of Physics Facility Electronics of the Moscow Institute of Radio Engineering, Electronics and Automation. The graduates from this department work at JINR, at the Engineering Design Office “Raduga” and other research-and-production institutions of Dubna. Since 2017, I. N. Meshkov is a professor of the Department of Information and Nuclear Technologies of the Saint Petersburg State University.

I. N. Meshkov fostered 14 candidates and 4 doctors of Physics and Mathematics. His students successfully work at JINR and other world’s leading accelerator centres. He is the author of more than 450 publications in authoritative journals and reports at international conferences. He is a member of the Editorial Board of the journal “Physics of Elementary Particles and Atomic Nuclei”. From 1995 till 2012, he was the Chair of the Scientific Council of the RAS Department of Nuclear Physics on charged-particle accelerators. At present, he is a Deputy Chair.

The merits of I. N. Meshkov in Russian and world science are awarded by prestigious state prizes and also by a prize of the European Physical Society “For outstanding work in the accelerator fields”. In 2019, I. N. Meshkov was elected an Academician of the Russian Academy of Sciences.

The Directorate and the colleagues of Igor Nikolaevich from the Dzhelepov Laboratory of Nuclear Problems heartily wish him good health and creative achievements on his 85th birthday!