January 15, 2021, marks the 80th birthday of G. V. Domogatsky, an outstanding physicist, Corresponding Member of the Russian Academy of Sciences, Doctor of Science (Physics and Mathematics), Head of the Laboratory of High-Energy Neutrino Astrophysics at the Institute for Nuclear Research of the Russian Academy of Sciences. Celebration of this jubilee is not a mere courtesy. Not at all! This eminent scientist, a holder of many awards and honors, has seen a lot in his 80 years. He is a living legend of neutrino physics. He is referred to in books and text-books since his name is associated with the largest physical projects and major scientific discoveries.

G. V. Domogatsky won international recognition with his much cherished project, the Baikal Neutrino Telescope. Following the proposal of academician M. A. Markov, in the 1980s the construction of a neutrino telescope at Lake Baikal started, efficiency of the device was proved, and pioneering results were obtained under supervision of G. V. Domogatsky.

Now G. V. Domogatsky supervises the construction of the giant BAIKAL–GVD neutrino telescope with a volume of one cubic kilometer. Using neutrinos, this facility will look far back into the eventful past of our Universe, the time of active formation of galaxies and emergence of supermassive black holes. Obviously, the gained new knowledge will become part of the world’s science treasury and substantially contributes to advance in cognition of Nature. 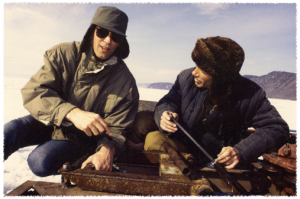 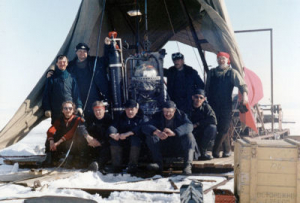 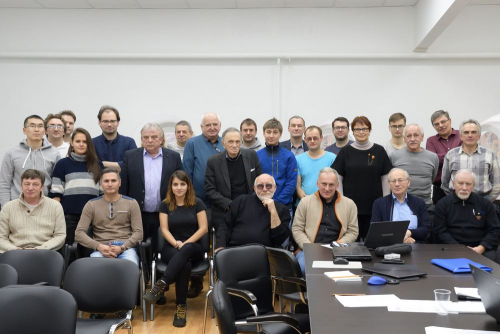 BAIKAL-GVD workshop in Dubna on 30 November 2017. | Photo by Bair Shaybonov.

The current generation is probably less aware of his other outstanding achievements. For example, the neutrino nucleosynthesis mechanism developed by G. V. Domogatsky in included in the modern theory of origin of chemical elements, and his works on interaction of neutrinos from a collapsing star with its shell substance solved a number problems related to the origin of some isotopes. Noteworthy are his investigations of gravitational collapse processes in a star, which resulted in prediction of a collapse-related neutrino burst. This can be observed in special underground and underwater experiments. The program for establishing a global network of the corresponding facilities was proposed by G. V. Domogatsky. The Global Neutrino Network has already been established and is searching for the events of this kind.

For his scientific achievements, G. V. Domogatsky was awarded the Cherenkov Prize of the Russian Academy of Sciences, the international Pontecorvo Prize, and the INR Markov Prize.

Those who personally know G. V. Domogatsky point out his scientific honesty, principled stance, depth and scope of scientific knowledge, sense of delicacy, attentiveness to people, and determined character.