On 17 December 2020, a unique X-ray microtomograph MARS upgraded at the Dzhelepov Laboratory of Nuclear Problems, JINR, was delivered to the Nanobiotechnology Lab at the Phystech School of Biological and Medical Physics (PSBMP), Moscow Institute of Physics and Technology (MIPT), in Dolgoprudny for carrying out biological and medical research. This could be a beginning of a new significant research collaboration resting upon a common instrumental basis. “This partnership is beneficial for all, which is often the case in the scientific community,” comments Denis Kuz’min, PSBMP Director. 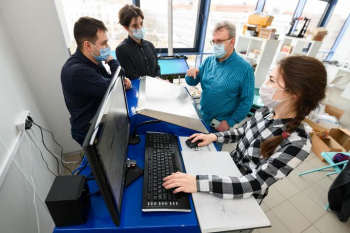 Both PSBMP and JINR are engaged in applied medical and biological research using magnetic resonance and computed tomography methods. The MIPT Nanobiotechnology Lab works to create new-generation systems for in vitro and in vivo targeted drug delivery.

Explains Maksim Nikitin, Head of the MIPT Nanobiotechnology Lab, “Computed tomography will help appreciably extend the range of theranostic agents to be developed. Though now we predominantly deal with magnetic materials, new equipment will allow us, for example, to directly image sites of accumulation of gold nanoparticles, which are among the most promising for subsequent use in a human body. The CT scanner will make it possible to optimize their properties and increase the efficiency of their delivery to tumours and other targets.”

JINR’s computed microtomograph MARS with a semiconductor pixel detector has a unique sensitivity. There is no more than 20 devices like this in the world. 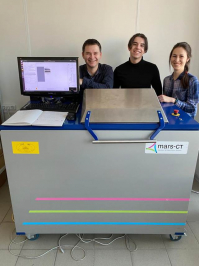 Heroes of the day: Vladislav Rozhkov, Daniil Rastorguev, and Elizaveta Cherepanova from DLNP, JINR, and MARS

At a meeting held in MIPT, an idea arose to unite efforts of MIPT, Prokhorov General Physics Institute of the Russian Academy of Sciences, and JINR in a joint project for researches with the microtomograph, including investigations of theranostic agents. These microobjects should become a source of new information important for medicine, biology, and pharmacology.

Says Georgy Shelkov, a leading researcher of DLNP, JINR, “In the last 50 years, computed tomography has passed a long way. Its further advancement may be related to advent and development of hybrid pixel radiation detectors operating in the single photon count mode. The main element of this detector is an ASIC of the latest generation. When used in computed tomography, these detectors maintain the basic characteristics of modern detectors and give rise to new ones, the main of which is an ability to measure energy of each detected photon. This information allows identification of substance in the scanned object. Thus, there appear additional abilities, unavailable in current computed tomographers, such as identification and separation of tomogram sections containing calcium (bones and calcification in various organs), differentiation of fat and soft tissues, and simultaneous use of several contrast media.”

Adds Vladimir Cherkasov, a leading researcher of the MIPT Nanobiotechnology Lab, “We have yet to learn the great potential of this device. Now a joint team is set up with JINR. They employ their full knowledge of the device, and we set biomedical objectives. The equipment is tested “in combat conditions”, and we together understand what parameters are attainable with what characteristics and at what settings.”