"Physics World" announces its Breakthrough of the Year finalists for 2020

"Physics World" announces its Breakthrough of the Year finalists for 2020

This year’s Top 10 Breakthroughs were selected by a crack team of five Physics World editors, who have sifted through hundreds of research updates published on the website this year. In addition to having been reported in Physics World in 2020, the selections must meet the following criteria:

• Significant advance in knowledge or understanding.
• Importance of the work for scientific progress and/or development of real-world applications.
• Of general interest to Physics World readers. 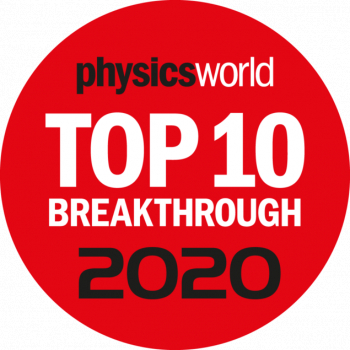 Among the finalists there is the Borexino collaboration, which comprises teams of scientists from Italy, Germany, the Unites States, Russia, France, and Poland, a total of about 100 participants. The DLNP group from JINR, one of the earliest participants, had been in the project since the beginning of its implementation in 1991.

“The Borexino collaboration”, writes Physics World, “is chosen for observing neutrinos from the carbon–nitrogen–oxygen (CNO) cycle in the Sun. The scientists had to painstakingly minimize the effects of background radiation in the Borexino detector, which comprises 278 tonnes of ultrapure liquid scintillator located deep inside a Gran Sasso mountain. Firstly, the discovery confirms a theory of stellar nucleosynthesis first proposed over 80 years ago. Secondly, it can encourage physicists to use the next generation of neutrino detectors to resolve the “metallicity puzzle” of the Sun, a mystery regarding the abundance of carbon, nitrogen and oxygen in the star”.

The Organizing Committee for the Breakthrough Prize, also known as the “scientific Oscar”, holds an annual award ceremony to celebrate the outstanding achievements of the Prize winners, attract additional support for scientific initiatives and encourage a new generation of scientists.