The article about the photography exhibition by Bair Shaybonov “Baikal. Neutrino Hunters” was published in the JINR weekly newspaper “Dubna: Science, Community, Progress”.

Do you want to enjoy amazing scenery of Baikal in winter? And to touch a glass sphere, an optical module to be submerged deep under the water? Visit the Exhibition Hall of the Mir Culture Centre where the photography exhibition “Baikal. Neutrino Hunters” has been recently launched. The photographer is a regular member of the International Baikal collaboration Bair Shaybonov. The exhibition is open till 30 October.

“Today, we start the celebrations devoted to the 65th anniversary of JINR,” said T. V. Romanenkova, Director of the Mir Culture Centre greeting guests of the preview on 10 October. “We start them with a photography exhibition which tells us about a construction of a unique facility, the deep-underwater neutrino telescope at Lake Baikal. The photographer is a regular member of a Baikal expedition, Candidate of Physics and Mathematics, DLNP senior researcher Bair Shaybonov.”

“It’s wonderful that the photography exhibition illustrating the singular BAIKAL-GVD experiment became the starting point of the celebrations of the 65th anniversary of the Joint Institute,” JINR Director V. A. Matveev addressed the audience. “One should be really keen to believe in the possibility of catching these elusive neutrinos. Today, the Baikal telescope is the largest neutrino telescope in the Northern Hemisphere, and it is absolutely inspiring to know that everything started in Dubna. In 1960, Academician M. A. Markov introduced the idea of catching neutrinos with a large-scale facility deployed deep under the sea or the lake. This experiment comprises not only a deep-underwater detector but also Baikal itself and the entire globe through which cosmic neutrinos with immense energies penetrate. I congratulate Bair and his colleagues! We all can be proud of this project.” 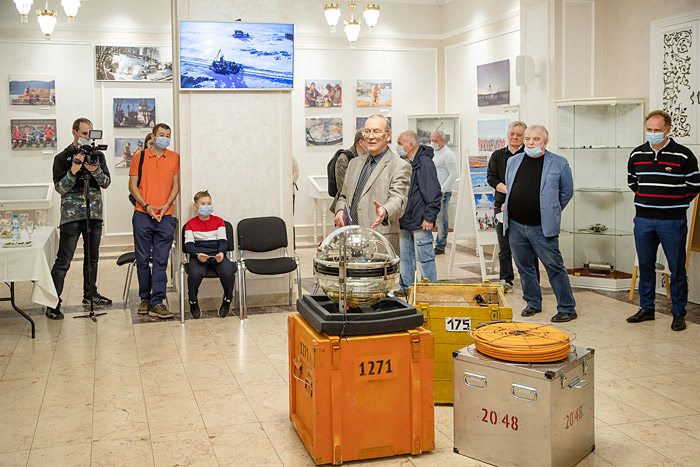 “This exceptional experiment is a great achievement of our Laboratory,” said DLNP Director V. A. Bednyakov. “Many years ago, several young scientists gathered by Tsvetan Vylov and Dezső Kiss launched the Baikal project at the department headed now by V. B. Brudanin. Hardly anything could have happened without G. V. Domogatsky (INR) and other researchers who have been working for our success for 20 years. Being an international organization, our Institute could survive during hard times when not all institutes survived. And afterwards, we managed to prepare this large-scale experiment and realize it.” 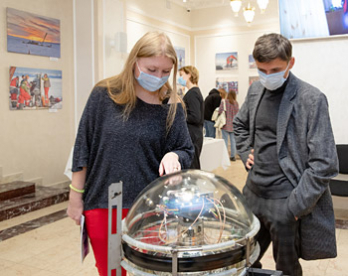 “I have been involved in this project from the very beginning,” added Co-Head of the project I. A. Belolaptikov (DLNP). “Maybe it evolves slowly, but there were some technical and financial problems. However, after JINR had actively started to support the telescope construction, particularly the Directorate and Viktor Anatolevich personally, we reached the competitive level not only in the Northern Hemisphere but also in the world. I would like to thank my colleagues from the Laboratory.”

“For the first time, I took part in the Baikal experiment in 2002 when I was a fifth-year student of MEPhI,” Bair Shaybonov said in his turn. “Every year I participated in the expedition, except the year 2003—I defended my graduation thesis then. I like photography since the days of my youth. I used a photographic film first, and a bit later, digital cameras appeared. One just can’t stop photographing this beauty during the expedition. Over the last years, I have already taken several thousands of pictures. I selected about 500 of them for the exhibition. We, along with my colleagues from the DLNP Group of Scientific Communications, selected about 100 photos arguing on every single one.

We tried to introduce all the technological moments we usually had during expeditions, but not all of them are presented. I took pictures in all weathers, most of all at the daytime, there are some night photos as well. You can see facility elements, equipment and members of the Baikal collaboration who enthusiastically do their work in complicated conditions. And also, a bit of the local fauna. I would like to thank all who organized this exhibition, I mean the colleagues from the Group of Scientific Communications. I hope this display will contribute a lot to promotion of JINR research projects. And I am going to continue photographing—the exhibition inspires me with new ideas.”

Showing me his photos, Bair shares some more details. “Just yesterday, in the evening, we were going here around and making up photography captions. Afterwards, they were edited by Natalia Mazarskaya (Group of Scientific Communications, DLNP). And today, two hours before the opening, we attached them to the photos. Actually, not me but this Group came up with the idea to organize this exhibition. They saw my photographs on the website, were inspired by them and proposed to initiate this event.”

“How do you like the quality of photo printing on canvas?” 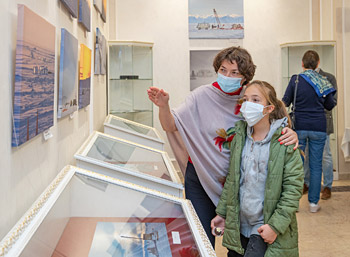 “It’s quite normal, but the photographs are paler than original ones. And the night pictures lost their deep black. Another thing we didn’t consider was that printed photos were stretched onto frames, which made a part of the image go out of sight. I think we will take all this into account next time. We hurried to organize this exhibition because the idea is just two weeks old, and in November, the exhibition hall will be fully occupied, and we had to select photos, and they were printed during just a week.”

“Do you always have your camera at hand in the expedition?”

“Of course, I don’t. I work there. And the batteries can be depleted very soon in the cold. Moreover, we work in the teams of three or four, and I can’t just go aside and make some pictures—the team would stand idle then. What is more, I am already an experienced expedition member compared to young people. They should be guided and prompted. There is no time to get carried away. At first, I photographed a lot, then I felt somewhat exhausted—all the possible scenes were captured, everything repeated. And preparing this exhibition, I realized that some moments should be pictured anew, for example, I should take a photo of the diver in another way.

The expedition spreads wide on the ice, and different tasks are performed simultaneously in different locations. It is extremely challenging to capture all moments when you are not a freelance artist, but a participant of these processes. The ice camp grew to an area of a kilometre squared, and it is not easy to get from one end of it to another—we go by car. To make everything more efficient, we need a photographer just for shooting, and even in this case he has to split up into pieces because several works are usually carried out at the same time. We have three assembly teams, and another one runs the bottom cable. There are different tasks on the shore as well. The project has really grown. As for me, I have a trained eye after all. Once I went by car, saw this row of winches aside, it was snowing. I already knew—the picture would be great. It is difficult to keep the depth in the photography. Besides, fog and snow add their effects too, a volume appears. I knew all this at once, stopped the car and made a photo. Or look at this photo made at sunset. After sunset the temperature abruptly falls at Baikal, and fog shows up. All this creates the ambience of a fantasy world, and silhouettes of people at work look very unusual.

We are physicists at last, we strive for high world-class results. This is our main ambition. And as for photography, it is just a complement helpful for promoting science.”