The "TAIGA" Project is the Winner of the 2018-2020 Open Russian-German Competition "Russia and Germany: Scientific and Educational Bridges"

The "TAIGA" Project is the Winner of the 2018-2020 Open Russian-German Competition "Russia and Germany: Scientific and Educational Bridges"

On 15 September 2020, at the closing ceremony of the Russian-German Year of Scientific and Educational Partnerships in 2018-2020, the winners of the Open Russian-German Competition "Russia and Germany: Scientific and Educational Bridges" received their awards. The Ministry of Foreign Affairs of the Russian Federation and the Federal Minister of Foreign Affairs of Germany summed up the results of the Year and named the winning projects during a live broadcast. The project "The TAIGA Observatory - Russia and Germany open a new window to the Universe" was recognized as the winner of the Competition in the category "Advanced Research" for successful long-term scientific cooperation.

The main objective of the competition "Russia and Germany: Scientific and Educational Bridges" is to draw attention to successful stories of the development of mutually beneficial cooperation between the two countries in the field of scientific and educational partnerships. Representatives of scientific organizations and universities developing Russian-German cooperation, as well as foundations from Russia and Germany that finance science, were invited to participate in the competition.

A total of 124 applications were received for four main categories: interuniversity partnership, cutting-edge research, support for young scientists and innovation. The presented projects manifested an intense Russian-German dialog between representatives of universities and academic community, highlighting examples, projects and personal communication of partners. Projects in both socio-humanitarian and technical fields of knowledge were announced for the Competition.

Russian scientists, young researchers and experts from Moscow universities and scientific organizations, and also from regional universities and research institutes showed their interest in the Competition. A significant number of applications came from different subjects of the Russian Federation, which indicates the high level and close cooperation of our countries. The German scientific and educational sector was represented by both young researchers and renowned respected scientists, representing almost all federal states of Germany.

Russian-German astrophysical studies have been performed at two large facilities in Siberia for over 30 years! The first stage of the cooperation was the construction of the NT-200 Baikal Deep-Underwater Neutrino Telescope in 1988—2007. This was the world’s first underwater neutrino telescope. The success of the neutrino project initiated astrophysical research at Irkutsk State University (ISU) and at DESY (German Electron Synchrotron), Zeuthen. Since 2011, the TAIGA project became the second stage of this cooperation.

The TAIGA Observatory (Tunka Advanced Instrument for cosmic ray physics and Gamma Astronomy) is an infrastructure used by both Russian and German scientists for astrophysical research.

The project is intended to study the high-energy region of the spectrum of gamma rays from the Universe with focus on energies beyond 10 TeV. The main goal of the study is to find an answer to the question of the origin of cosmic rays in the range from 10 ^ 14 to 10 ^ 18 eV. The experiment is located near the southern end of Lake Baikal on the astrophysical test site in the Tunka Valley (Republic of Buryatia) and comprises several facilities measuring the parameters of extensive air showers generated by the interaction of cosmic rays or high-energy gamma rays with the atmosphere. As a result of these measurements, it is possible to reconstruct the direction of arrival of cosmic rays, their type and energy. Measurement accuracy is enhanced by a combination of different detection systems. At the same time, studies of the TAIGA prototype are underway to increase the observatory sensitivity by using new sensor technologies and larger effective areas of the facility (increased by up to 10 times). 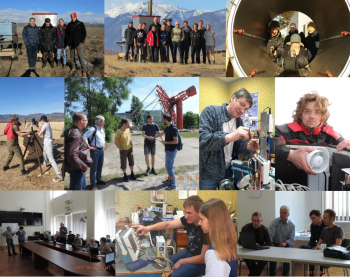 Photo 1. The photo collage shows various activities within the project and its participants. Young scientists involved into the project encourage interest and maintain a creative atmosphere. 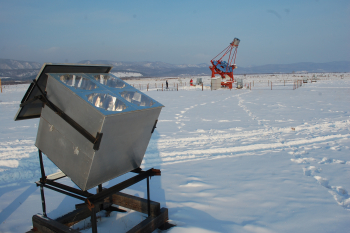 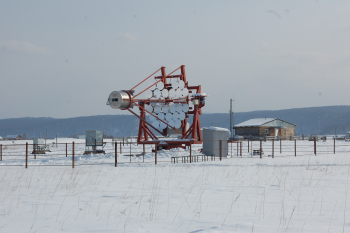 Photo 3. The TAIGA Observatory. The view of one of the TAIGA telescopes, and in the background to the right, of the DAQ-centre (a wooden house). 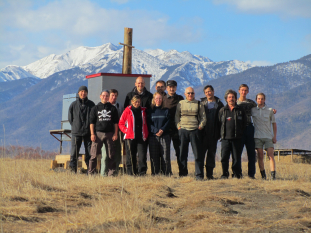 Photo 4. A group of scientists from the Russian-German TAIGA team in 2012 after the construction of the first prototype detector.

Photo 5. Overview of the TAIGA observatory: the array of TAIGA-HiSCORE stations (located at 110 m distance) and the DAQ-centre. By autumn 2020, an area of 1 km2 will be instrumented with HiSCORE stations and three IACTs.