The six-string configurations of ARCA and ORCA are taking data smoothly.  The first measurement of oscillation parameters with ORCA has been presented at ICRC (https://pos.sissa.it/395/1123/pdf). Oscillations are preferred with a confidence level of 5.9 σ over “no oscillations”, the resulting sensitivity contour is shown in the figure below. 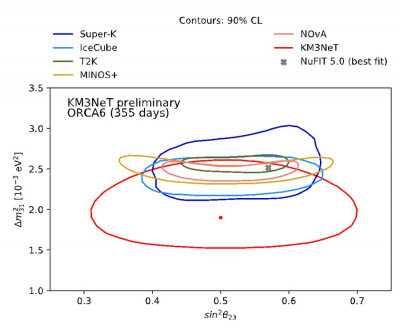 The September cruise at the ARCA site ended with two instead of the planned five new DUs (strings). The reasons for the failures are understood and the crew looks forward optimistically to deploy about 20 strings in 2022. Read Simone Biagi´s report on the cruise:

On the 10th of September 2021, the “Handin Tide” boat sailed from the Malta harbor at La Valletta, carrying 5 brand new Detection Units (DUs) for the KM3NeT/ARCA telescope. The 5 DUs were integrated in Caserta and Catania to be installed in the Mediterranean Sea 80 km off the Sicilian coast of Capo Passero, at 3,500m depth.

After four days of strenuous activity, two DUs were deployed and successfully connected to the Junction Box (already available on the seafloor). A third DU was also unfurled and fully tested, but due to a problem with its connector on the junction box cannot be operated at this time. Two DUs with minor problems were safely recovered and will be deployed at a later time. We had also the possibility to recover a non-working detection unit (deployed in May 2016) and a prototype detection unit (deployed in May 2014).

Klaus Leismuller, Giorgio ‘Seadog’ Riccobene, Edward Berbee, and Daniele Vivolo were on board of the Handin Tide, operated by the FUGRO company. KM3NeT experts of power, optics and data acquisition gave their valuable support onshore, in the Portopalo INFN lab. Extensive functional tests were immediately performed after the installation and connection of each part. Immediately after the end of the campaign, detector calibration and DAQ commissioning started. We have less travel limitations in Europe now, so also colleagues from Paris and Amsterdam could join the onshore team. What a wonderful experience, working together again after almost two years of video meetings only!

The two detection units installed are now taking physics data together with the other six DUs already in place, for a total of eight. No ARCA sea campaigns are foreseen in the winter period, due to non-optimal weather conditions. The Collaboration is working to organize two big sea campaigns in 2022 to install another 20 detection units in the ARCA site.

Concerning ORCA, another seven DUs will be installed before the end of the year, to be added to the six units currently taking data there.

And here are the pictures sent by the ARCA crew: 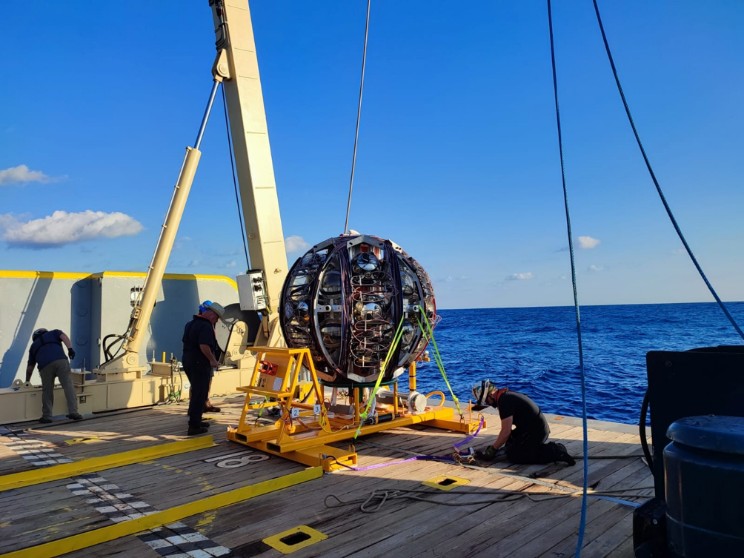 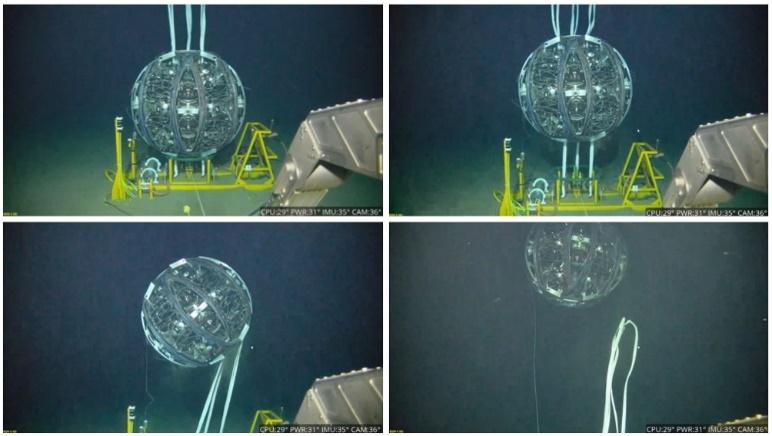 The detection unit unfurling sequence. It is visible the right arm of the ROV that triggers the unfurling mechanism 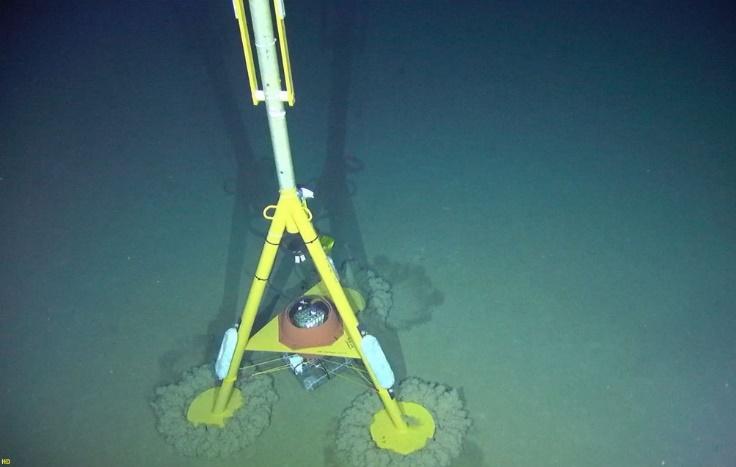 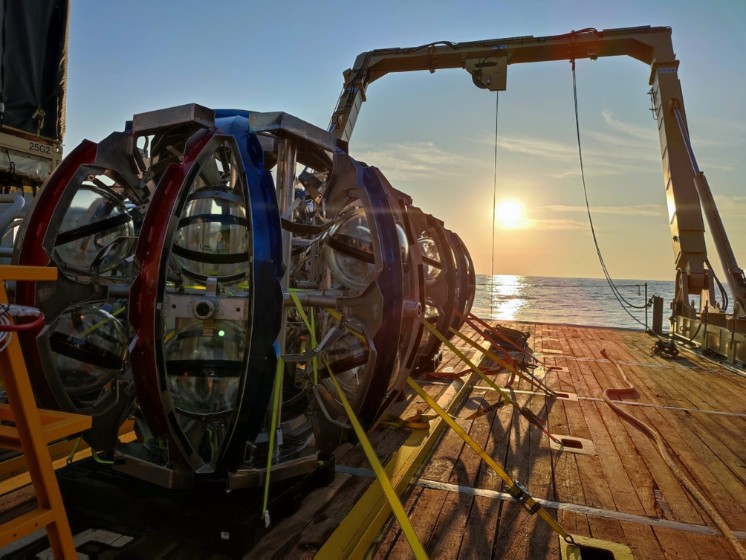 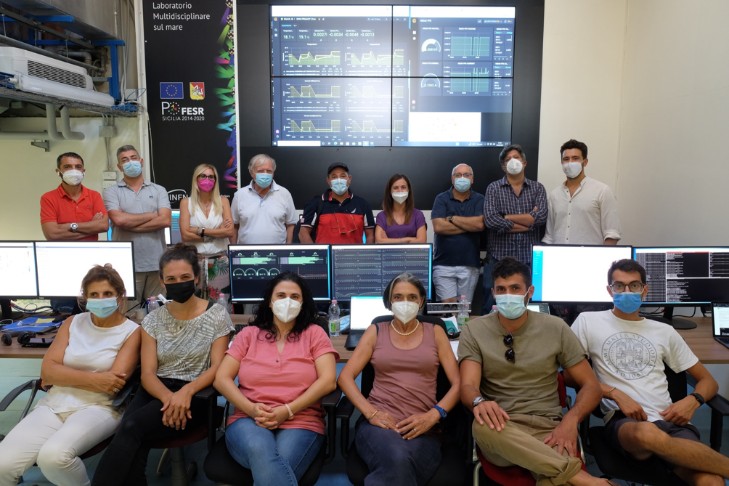 KM3NeT experts and shifters from the INFN Portopalo lab. Can you recognize them behind the mask?

The IceCube collaboration meeting was held on September 21-23 online, with the University of Wisconsin at Madison as a virtual host. Major changes to the meeting format were made to reduce the impact of  the accumulated zoom fatigue. Only plenary presentations were made. Material that normally would have been covered in parallel sessions was moved to regular calls, while there will also be a number of special topical workshops to be organized over the next two months. Participation in the collaboration meeting was very high and in-line with what was normal for in-person meetings. The next collaboration meeting is planned to be in Brussels in May of 2022. Current planning is for an in-person meeting, with alternate plans for online if needed.

The preparation of the IceCube Upgrade (7 closely spaced strings) moves ahead, with 185 D-Egg modules produced in Japan and the first 6 verification modules of the mDOM type in Germany. Drill cables and drill hoses have arrived and have been tested. The deployment season for the Upgrade will be shifted by two years, due to COVID and the related restrictions to all South Pole operations, i.e. from the season 2022/23 to the season 2024/25. Note that this does not necessarily mean that the Gen2 construction timeline will be shifted.

Below is a photo taken inside the IceCube Laboratory at the South Pole. Not so much different from the data center of a small accelerator experiment! The picture was part of a fantastic talk of the 2019/20 winterovers John Hardin and Yuya Makino at the IceCube meeting. 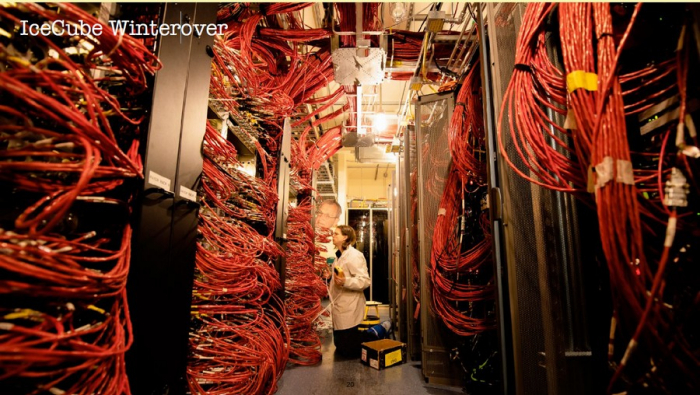 The IceCube Collaboration has submitted a paper Search for multi-flare neutrino emissions in 10 years of IceCube data from a catalog of sources to Astrophysical Journal Letters (posted at 2109.05818.pdf).  A recent time-integrated analysis of a catalog of 110 candidate neutrino sources (see 1910.08488.pdf ) revealed a cumulative neutrino excess in the data collected by IceCube between April 6, 2008, and July 10, 2018. This excess, inconsistent with the background hypothesis in the Northern Hemisphere at the 3.3σ level, is associated with four sources: NGC 1068, TXS 0506+056, PKS 1424+240 and  GB6 J1542+6129.

The binomial test identifies a cumulative time-dependent neutrino excess in the Northern Hemisphere at the level of 3.0σ, which is associated with four sources: M87, TXS 0506+056, GB6 J1542+6129 and NGC 1068. M87 appears as the most significant source, with 3 signal-like neutrino events in a time window of 2.0 minutes and with a soft spectrum (γ = 3.95). The post-trial significance of M87 is 1.7σ. This analysis also identifies the two well-known flares at the location of TXS 0506+056, however, the significance of the result is lower than the one reported in Aartsen et al., Science, 361 (2018) 147, mostly due to a new data selection which introduces a new energy reconstruction different from the past one.

In another paper, the IceCube collaboration presents the results of a Search for Relativistic Magnetic Monopoles with Eight Years of IceCube Data (2109.13719.pdf). The paper was submitted to Phys. Rev. Lett. It is based on 2886 days of IceCube data and was optimized for monopole speeds between 0.75 c and 0.995 c, without any explicit restriction on the monopole mass. It constrains the flux of relativistic cosmic magnetic monopoles to a level below 2.0×10-19 cm-2 s-1 sr-1 over most of the targeted speed range. This constitutes the tightest upper limit to date for magnetic monopoles above the Cherenkov threshold and up to 0.995 c and fills the gap between existing limits on the cosmic flux of non-relativistic and (not shown in the figure) ultra- relativistic magnetic monopoles – see the figure below.

The KM3NeT collaboration has submitted a paper Implementation and first results of the KM3NeT real-time core-collapse supernova neutrino search to Eur. Phys. Journal (see 2109.05890.pdf).   In 2102.05977.pdf  (see also GNN Monthly of February this year) the collaboration has demonstrated how KM3NeT can identify a burst of MeV neutrinos from a Supernova. The method is to look for a sufficient number of DOMs with the multiplicity of

fired small PMTs (31 per DOM) being above a certain threshold number (defined by the background counting rate from 40K decays) and, in addition, to apply cuts against the light from high-energy muons which can easily fire more than 5 small PMTs in a DOM. The expected number of events (which means in this case: the number of DOMs) in a KM3NeT building block strongly decreases with increasing threshold multiplicity for the small PMTs in a DOM. Due to the difference in the muon filter performance, the background rate at higher multiplicity is lower in an ORCA block than in an ARCA block.

The present paper describes the analysis pipeline for the supernova search as it is implemented as a real-time system. It is operational since mid-2019. The real-time trigger is based on the event selection described in 2102.05977.pdf. A buffering of low-level data exploitable in the follow-up of confirmed detections has been introduced, together with methods for a quasi-online astronomy analysis of the detected “neutrino light curve”. The continuous evaluation of the time-dependent detection significance of the combined ARCA and ORCA signals allows generating internal alerts. Corresponding false alarm rate (FAR) thresholds are defined for the triggering of the quasi-online analysis and the sending of alerts to external networks. KM3NeT is taking part in the Supernova Neutrino Early Warning System (SNEWS), being one of the detectors with the lowest latencies (about 20 s). With the detector configuration operated until this month (ARCA6 + ORCA6), the horizon up to which a significant detection can be expected is around 10-15 kpc.

In the current configuration, four classes of supernova alerts have been defined:

exploited for the routine testing of the quasi-online analysis;

The following figure shows the maximal source distance for which the ARCA6 + ORCA6 detector is able to produce an alert for the FAR thresholds corresponding to the mentioned classes.

This analysis has also been used to search for neutrino counterparts of two gravitational-wave candidate events sent by the LIGO-VIRGO Collaboration during the O3 run. No signal has been found and constraints on the presence of core-collapse supernovae have been set. These results have been reported in the first two GCN circulars issued by the KM3NeT Collaboration, representing the first results of the KM3NeT Collaboration in the domain of multi-messenger astronomy.