The character of the talks corresponded to what we typically have at MANTS workshops, but with much more talks than at the standard 1.5-day MANTS meetings. It is hopeless to try summarizing the talks. Browse through the program at https://indico.ific.uv.es/event/3965/timetable/#all

In the concluding session, chaired by Uli Katz, Juande Zornoza presented an interesting and funny questionnaire to which participants could respond online. The questions and answers are displayed below.   I take the opportunity to comment. :) 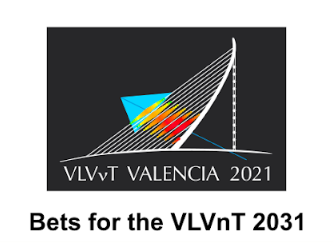 Answers to the first question show a clear preference for another AGN: 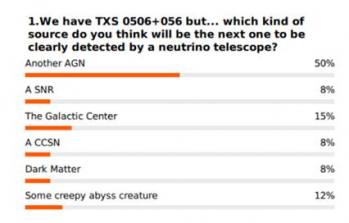 For those who have chosen “Some creepy abyss creature”, I recommend googling “Russian Scientists Have Not Been Eaten By Prehistoric Monster”.

What a nasty option 4: 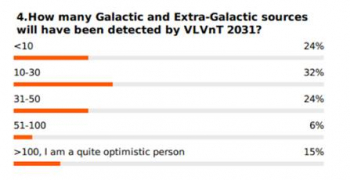 A proof that we are optimists. To say it with Francis Halzen: “Nothing is guaranteed, but history is on our side”.

Following the recent paper of Bartos et al. (2105.03792.pdf (arxiv.org), see also last page of this edition) the percentage of unknown sources is 28%, so the correct answer to the question above would be 72%. Good to have precise estimates! 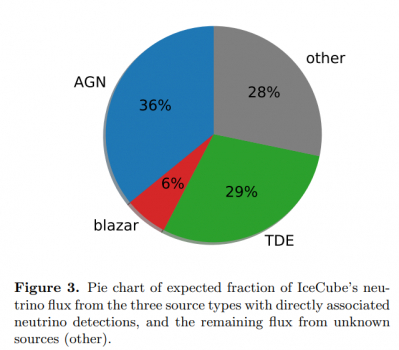 Who, the devil, did not vote for the last option?

Who, the devil, did not vote for diversity?

For the last question it is clear: KM3NeT/ANTARES/P-ONE people voted for whales, Baikal and IceCube people for dark matter since they have no whales. Hardcore BSM freaks took nuclearites, monopoles  and sterile neutrinos. 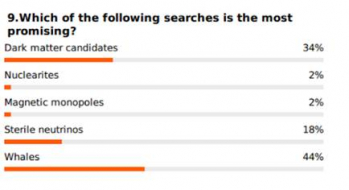 Uli Katz, in his concluding remarks, addressed three issues: A discussion on neutrino physics with neutrino telescopes, an initiative towards extended cooperation between the neutrino telescope collaborations, and the future of the VLVnT workshop and the MANTS meeting. Participant opinions were polled with regard to the latter two points.

Here Uli’s own summary of his slides and of the discussion:

In neutrino physics, we have gone a long way, from first attempts to use neutrino telescope data for "parasitic" oscillation studies to new, intriguing, partly leading results and to the construction of dedicated detectors such as IceCube/DeepCore and the IceCube Upgrade and KM3NeT/ORCA. A broad range of physics topics including Beyond-Standard-Model physics (sterile neutrinos, non-standard interactions, ...) is in reach, and promising beam options like a tagged neutrino beam from Protvino to ORCA are discussed.

One point mentioned during the discussion relates to the timelines of our experiments and the global development of the field. The current practice to compare projections of future sensitivities to current measurements does not always provide a clear picture. Also discussed was the broad spectrum of physics topics offered by neutrino telescopes. It was seen as a major asset for attracting students, but also may create problems in funding requests, e.g., through possible requests to define priorities. Ty de Young commented that in the US both aspects are seen more as complementing each other than as competition. Olga Botner pointed out that in Europe particle physics activities with neutrino telescopes are in many cases neither strongly supported by the particle physics nor by the astrophysics communities.

Already before the workshop, Carlos de los Heros had addressed Uli and Christian and suggested  to establish a working-level activity in GNN, e.g. by establishing topical working groups with experts nominated by the collaborations. The objective would be to profit, on a working level, from the exchange of information on subjects such as analysis methods and simulation, and to initiate further common analyses. An overwhelming majority of the participants supported that idea (see the figure), which will be further pursued by the GNN Board.

In its meeting on 21 April, the GNN Board discussed the future of VLVnT and MANTS (see GNN Monthly of April 2021). Both meetings are to be combined and should have the character of an open

GNN meeting, rather than an astroparticle conference. Details are still under discussion. The participants expressed strong interest in participating in such future meetings, but were divided in their preferences on nature and frequency of these meetings and on the question whether there should be proceedings (see the next figures). These poll results will be an important input to the further deliberations of the GNN Board.

Uli concluded by thanking the local organizers, the Scientific Advisory Committee, the speakers, session chairs and participants for a very successful workshop. He emphasized the constructive support of the collaborations in identifying suitable topics and speakers.

In this spirit the answer to the last question can be understood as a compliment to the IFIC hosts! 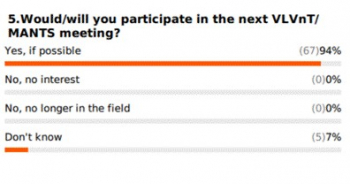 After the successful sea campaign of mid-April 2021, six DUs are now fully operative at the KM3NeT/ARCA site. After the commissioning, the detector is in stable data taking since May 13.

The first results, which use preliminary time and position calibrations, have been presented at the VLVnT2021 workshop. The reconstructed zenith angles of the muon tracks are reported in Fig.1 together with the Monte Carlo expectations. The agreement with the simulations is at level of 20%. An improvement is expected when a more refined calibration is done. With ARCA6 a zenith angular resolution of about 0.6° is reached. A nice display of one of these.

With the two six-string detectors in operation, ARCA6 and ORCA6, KM3NeT has already reached, and at energies high enough even surpassed, the effective area of ANTARES, as shown in the next figure.

1. The Carpet collaboration has posted a paper Observation of photons above 300 TeV associated with a high-energy neutrino from the Cygnus Cocoon region at 2105.07242.pdf (arxiv.org). Carpet is an air-shower experiment co-located with the Baksan Neutrino Observatory. It includes a central 200 m² liquid scintillator detector (the “Carpet”), five smaller outer detector stations and a 175 m² shielded detector with 1 GeV threshold for vertical muons.

In November 2020, IceCube reported an ∼150 TeV neutrino event from the direction of a Galactic PeVatron candidate, the Cygnus Cocoon. The Carpet collaboration report on the observation of a 3.1 σ  (post trial) excess of atmospheric air showers from the same direction. The excess is consistent with a few-months flare in photon candidates above 300 TeV which includes the day with the neutrino event. The fluence of the gamma-ray flare is of the same order as that expected from the neutrino observation, assuming the standard mechanism of neutrino production. The authors consider this as the first evidence for the joint production of high-energy neutrinos and gamma rays in a Galactic source. Certainly a motivation for IceCube to look into our archival data, as we did for TXS 0506+056!

2.   On May 17, a paper from the LHAASO collaboration has been published in NATURE: Ultra High-energy photons up to 1.4 Petaelectronvolts from 12 γ-ray Galactic sources.  They report the detection of more than 530 photons at energies above 100 TeV and up to 1.4 PeV (!) from 12 ultrahigh-energy γ-ray sources with a statistical significance greater than seven standard deviations. Despite having several potential counterparts in their proximity, including pulsar wind nebulae, supernova remnants and star-forming regions, the PeVatrons responsible for the ultrahigh-energy γ-rays have not yet been firmly localized and identified (except for the Crab Nebula), leaving their origin open.

3.  Last but not least a reference to the pie-chart paper mentioned on page 2: The IceCube Pie Chart: Relative Source Contributions to the Cosmic Neutrino Flux (arXiv:2105.03792). Based on the previous 5 IceCube associations treated as “source detections” (3 blazars, 1 AGN, 1 TDE), and taking into account the source densities of blazars, AGN and TDE, they arrive at the following contributions of these objects to the IceCube diffuse flux. AGN: 0.36 ± 0.31 0.27, blazars:  0.06 ± 0.06 0.04, TDE: 0.32 ± 0.30 0.24, others: 0.28 ± 0.38 0.25. Note that   the small contribution of blazars (in spite of 3 “source detections”) is due to the fact that blazars are rare, making them much easier to identify through multi-messenger searches than a more common source type with similar flux contributions.

Although with only 5 such associations the errors are still ridiculously large and the paper is not yet much more than an exercise, with more data from all three present experiments this method could give us extremely interesting information.