In our latest Friday column issue “The 20th century. Everyday life of a researcher” we wrote about wall newspapers at JINR laboratories. Our readers told us that DLNP also had its own wall newspaper Luch (Ray). One of its editors was Georgy Aleksandrovich Shelkov. Here is his story.

“Now I cannot recall all the members of the editorial board. I only know that Yuri Alekseevich Gornushkin, an irreplaceable artist of our wall newspaper, and I did work on it. The particular period of our participation in this work needs to be recollected. What I am really sure about is that in 1980 it was still produced. I remember it due to a very typical instance of that time.

On 25 July 1980, Vladimir Semenovich Vysotsky died, who was one of our cult figures and whose songs we rerecorded from one another’s tape recorders.

We obviously thought it was necessary to commemorate the passing of Vladimir Semenovich, who gave a few concerts at the House of Culture “Mir”. Relations between the Taganka Theatre and Dubna are a particular topic to speak on. Our friends from the Scientists’ Club in Protvino gave us a photo of Vysotsky taken by them during one of his concerts in their town. We added half a Whatman paper sheet to the already completed wall newspaper to post this photo and the lyrics of the song “Headstrong Horses”. In a couple of days, I was demanded to come to the secretary of the LNP Party Committee or his deputy for ideology and asked where I had taken the text from. Since I anticipated a question like this (sign of the times), I showed him an official phonograph record with this song. Nevertheless, I was required to remove this addition to the wall newspaper that very evening. It is funny that after I fulfilled the requirement, he who required this asked me to give him this photo. That part of the wall newspaper was long kept in my working room. And I had time to scan the photo. 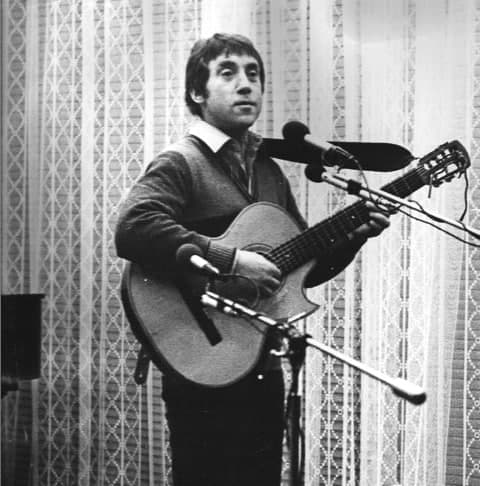 To conclude, I'd like to ask our readers a question on the history of JINR.
What happened on 26 August 1991 that fundamentally changed the life at JINR?
Next time, if you get interested, I’ll tell the particulars”.