A couple of weeks have passed, and finally the next, twelfth day, has come. I have had to return urgently to Dubna. During these last two days the work was in full swing both on the ice and ashore. Spirits ran high. The atmosphere as well.

In fact, not only two new clusters are to be installed during this expedition but also three previously mounted clusters have to be almost completely brought apart to repair faulty components. To fully realize the progress made in the neutrino telescope construction technology, we should remember the days past.

Deep underwater neutrino telescopes date back to 1960 when Moisey Aleksandrovich Markov, working at that time at JINR, came up with an idea to detect neutrinos in open water.

We know that light slows down in water by 25% of its speed in vacuum. And a muon does not care about it. If the energy of the muon is many times larger than its mass, it rushes with the speed that is really close to the speed of light in vacuum. As a result, a shock wave occurs in water just like a shock wave of a supersonic plane in the air. It is not a sound wave in water, though, but a light wave. This kind of radiation is known as Vavilov-Cherenkov radiation after the Soviet physicists who first experimentally observed it.

In 1958, Cherenkov, Tamm and Frank were awarded the Nobel Prize for the discovery and explanation of this phenomenon. Already in 1960, M.A. Markov suggested to use the Cherenkov light for detecting neutrinos.

The world physics community liked the idea at once. The humanity, however, was not ready to turn large water bodies into particle detectors. And only 16 years later, physicists attempted the DUMAND experiment (Deep Underwater Muon And Neutrino Detector project) nearby the Hawaiian Islands.

This experiment did not succeed. Physicists could not fix a string with optical modules at the bottom. It did not seem hard in a draft, but it was a really challenging task in the ocean. A negative experience is often more instructive than a positive one. It became obvious that plenty of technical problems should be solved before. And it was clear which ones.

The Baikal Neutrino Telescope came into being only twenty years later after the proposal of M.A. Markov. And again, it was the idea of Markov (and Chudakov) to build the telescope of this kind in Lake Baikal. M.A. Markov asked a young scientist G.V. Domogatsky (at that time he was not even forty) to head this project. G.V. Domogatsky accepted the proposal and from then on, he has been leading this project for about 40 years.

The first ten years were spent on the studies of the water and the bottom of Lake Baikal. In the 1990s, early versions of the Baikal Neutrino Telescope were constructed. For the first time in the world! Here are some historical photos. 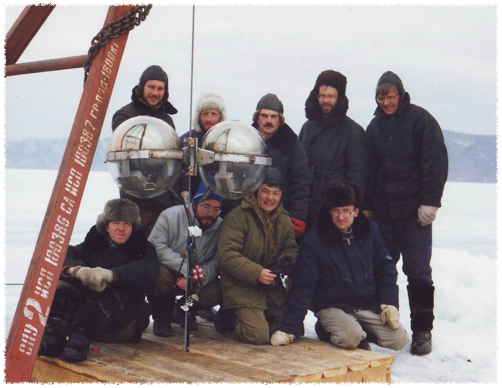 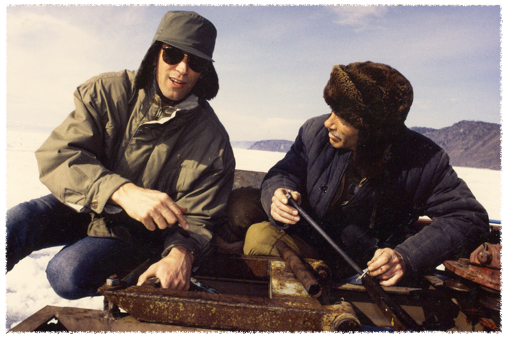 In the photo (left to right): Christian Spiering and G.V. Domogatsky at Lake Baikal.

It was Lake Baikal where atmospheric neutrinos were detected for the first time in the world. These achievements showed that Markov’s idea worked, and physicists started installing other neutrino telescopes.

On the South Pole, the AMANDA neutrino telescope was firstly constructed, and after that IceCube. The latter made once a significant discovery. Along with atmospheric neutrinos produced in the Earth’s atmosphere as a result of its hitting by cosmic protons and other nuclei, there are also neutrinos coming in from the depths of the Universe. They might have been born after some catastrophes billions of years ago! Over all these years, neutrinos rushed to us to hit the facility and to yield a powerful flash of light. How much this flash of light can tell scientists about the happenings in the Universe four or five billion years ago!

After this discovery in the IceCube experiment, a new era in the history of the Baikal Neutrino Telescope has been launched. It became obvious that the Baikal water with its unique characteristics can help display with good resolution those regions of the Universe where neutrinos come from. In the ice of the South Pole, it cannot be done at the same high level because light greatly re-scatters, losing the information about the initial incoming direction. You can see that clearly if you look at the Sun trough the ice block in this picture. Let us determine the Sun direction in an almost even radiance of the ice!

Another stage in the history of the Baikal Neutrino Telescope is interwoven with JINR. High-energy astrophysical neutrinos discovered on the South Pole open the door welcoming a new science, neutrino astronomy. Baikal with its crystal-clear water almost does not distort the light direction, and the experiment can become a key in this nascent science.

The JINR Directorate approved the construction of the facility with a volume of about one cubic kilometre in the Baikal water, and the cooperative work of many institutions got underway constantly speeding up.

In 2015, the first cluster named Dubna was put into operation. Not to the full extent, however. Instead of 36 optical modules which were to be hooked on each string according to the project, only 24 could be assembled within one expedition season. In 2016, the Dubna cluster was completed. In 2017, the second one was mounted, and in 2018, the third one.

What happened in 2018 was the Baikal Neutrino Telescope became one of the largest neutrino telescopes in the Northern Hemisphere leaving behind other projects, for example, the European KM3NET and ANTARES in the Mediterranean Sea. It is only IceCube on the South Pole that is larger than our telescope.

The year 2019 set in. Just over the last four years, all the telescope elements had been greatly improved. The assembly technology advanced every year. The reliability of components increased. Nowadays, we do more during one expedition season than earlier within four of them!

By now, all five clusters have been installed, they are thoroughly being tested. There are just a few days left till the expedition ends. Despite the strong winds “Gornyak” and “Bargusin”, our guys were eager to solve all the problems to make every element work trouble-free.

Sometimes, the strings already assembled had to be dismounted again because of the faults that were not expected or observable on the test bench at laboratories. These faults appeared only here, in real operation conditions with long cables. They were quickly eliminated thanks to the excellent new repair basis with plenty of spare parts. Afterwards, the string should be assembled again and tested, and so on. The worst scenario is to dismount a string again just after completing it to look for the channel that is out of service.

What to do? Everything should work perfectly and be able to withstand even a direct hit of an atomic bomb. Have a closer look at the new movable telescope control centre. The doors are really massive with a width of 20 to 25 cm. It is fully self-contained. One can easily spend a winter here. Even a nuclear winter. There is an in-house power supply. If the movable centre were dropped into Baikal, it would merely come to a halt at the bottom and continue its operation with dwellers inside (going to test it soon, but ssshhh… it is a secret!). They even would not notice anything and would just go on drying their boots and analyzing incoming data. Everything is done to the maximum. Even Rastislav’s neighbour, named in real life Maksim, is called here “Maximum”. There is a reason for it. Neutrino radiation.

While I was describing the twelfth day, two more days passed by. What happened? We did it! Two new clusters have been installed within one expedition season, and all the tests have been completed. The cables have been laid. The ice camp is now being cleaned up, the final check is being performed.

We are happy to have scientists, engineers, metalworkers, welders, drivers, cooks as expedition members. All of them are unique. All of them are ambitious. From Germany, Poland, Russia, Slovakia, the Czech Republic. We hope that this list will be longer with time.

Watch our animated educational video on how our telescope is being installed, speeding up step by step. At the end of the video you can see the flags of Dubna, Moscow, Prague, Krakow and Bratislava. At present, the idea is being considered within the Baikal collaboration to name the clusters after the cities whose scientists contribute to the Neutrino telescope construction.

The author and creator of the animated video is Semen Gursky (DLNP, JINR).