Results of 10 years of the Borexino experiment: the most precise spectral analysis of solar neutrino fluxes

Results of 10 years of the Borexino experiment: the most precise spectral analysis of solar neutrino fluxes 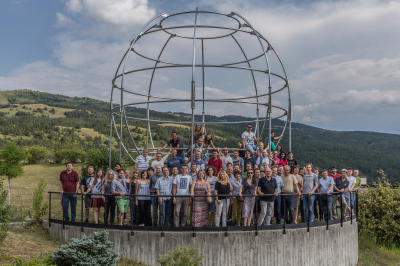 The international collaboration Вorexino published yesterday, on 24 October, in Nature the compendium of its results on neutrinos, accompanying the thermonuclear processes in the Sun.

The Borexino detector is ultrasensitive instrument constructed for the Solar neutrino studies. Detector registers neutrino from the Sun by scintillation light from the scattered off electrons in the liquid organic scintillator of the total mass of 300 tonnes. The concentration of radioactive elements in the central part of the detector is lower by a factor of 1010 compared to the typical ones in ordinary materials. The ultra-low level of radioactivity achieved in the detector is one of the milestones of the Borexino project success.

The most precise and complete results of the spectral analysis of accumulated so far data are presented in the new publication. Oleg Smirnov, the senior researcher of DLNP JINR, comments that earlier analyses were performed in a narrow energy ranges, tuned for each of the neutrino species. As a result of careful work on the energy scale calibration, the energy interval for the spectral analysis was significantly enlarged to accommodate 3 different solar neutrino spectrum components. The uncertainty of the “beryllium” neutrino flux is reduced to 2.7%, two times better than existing theoretical prediction. For the first time the robust signature of the “рер” reaction in the Sun is detected, confirming the presence of corresponding process in the Sun. Neutrino flux from the boron-8 reaction is measured with the low energy threshold of 3.2 MeV, unreachable in other neutrino detectors. The high precision of the pp-neutrino flux measurement revealed further details of the thermonuclear processes in the Sun’s core, and confirmed the thermonuclear origin of the Sun’s energy production.

At the same time, through the comparison of these experimental data of very high quality and accuracy with the forecasts of the Standard Solar Model, Borexino demonstrates incontrovertibly the existence in the low energy region of the oscillation between neutrinos of different flavour by the MSW (Mikheyev-Smirnov-Wolfenstein) effect. In particular, Borexino emphasizes in a completely autonomous way, using only its own data and without having to resort to results of other experiments, the peculiar transition between the two regimes of “vacuum” and “matter” that represents the signature of the MSW effect.

The study of solar neutrinos is of primary importance for solar physics and astrophysics. The controversy in the prediction of the concentration of elements heavier than helium based on different sets of measurements puzzles physicists for near a decade, the problem is known as solar metallicity puzzle (or, in other words, the problem of the chemical composition of the Sun). The prediction for solar neutrino fluxes depends on the heavy elements concentration, thus its measurement can be used to solve the problem of the solar metallicity. The new Borexino results are in better agreement with predictions of the high metallicity models, though the less probable low metallicity for the moment can’t be completely ruled out. Nevertheless, it is the first indication of the kind in the history of the solar neutrino studies. We can state that the first step towards the solution of the metallicity problem is made in the publication.

The Borexino experiment joins efforts of scientists from several European (from Italy, Germany, France and Poland), USA and Russian scientific centres. The group from DLNP of JINR is one of the founders of the experiment, participating in the collaboration from the stage of the project discussion in 1991 году. Together with JINR scientists our colleagues from other Russian institutions are taking part in the experiment, these are: NRC «Kurchatov institute» from Moscow, NRC KI-PNPI from St. Petersburg, and SINP MSU.

Borexino plans to take data till 2020, the collaboration aims to measure the neutrino fluxes produced in the carbon-nitrogen cycle in the Sun. In case of success, this will be the first measurement of that kind confirming the theoretical understanding of the energy production mechanism in stars more massive than the Sun.

e-mail for contacts: This email address is being protected from spambots. You need JavaScript enabled to view it.