Production of Micromegas Chambers at the Dzhelepov Laboratory of Nuclear Problems, JINR

Production of Micromegas Chambers at the Dzhelepov Laboratory of Nuclear Problems, JINR 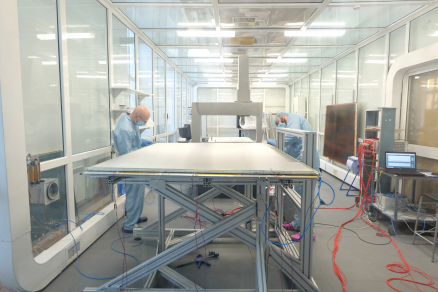 The increasing luminosity and energy of the Large Hadron Collider (LHC) planned to be upgraded during its long shutdown in 2019-2020 will cause the substantial growth of the ATLAS detector radiation load, first of all, in the areas around the interaction point of two proton beams. One of the elements in these areas is the Small Wheel (SW) of the muon system. The New Small Muon Wheel should replace the old one. The main position detector of the New Wheel will be the Micromegas chamber, a microstructural detector with the gas multiplication mechanism based on photolithography. This replacement should be done for two reasons: to keep high efficiency of particle separation and to increase the background event suppression in the first-level trigger.
The first panel of the Micromegas chamber for the ATLAS muon spectrometer upgrade was successfully mounted in May 2017. To perform the task, a special site, including two clean rooms, a gas test room with test benches, had been organized at DLNP. Production facilities were assembled and adjusted. From that time on, JINR takes part in the mass production of Micromegas chambers for New Small Wheels (NSWs) of the ATLAS muon system preparing the LHC for High-Luminosity operation.
JINR became a member of the MAMMA collaboration (Muon ATLAS MicroMegas Activity) in 2013. Our muon team was charged with production and testing of external parts of the large ATLAS NSW sectors. The chamber surface area is approximately 3 m2. Totally, 64 (+4) double-sided readout panels should be manufactured and 32 (+2) modules, or, to put it another way, quadruplets, mounted. A quadruplet comprises two double-sided readout panels and three drift ones. Produced panels and modules will be tested for precision of geometric characteristics (thickness, surface flatness), arrangement of printed-circuit boards and panels in relation to one another, gas leak and high voltage. The module functionality testing is the final check performed on the cosmic-ray test bench. After that the modules are sent to CERN for integrating into the base frame of the NSW structure. The modules are assembled using drift panels fabricated at Aristotle University of Thessaloniki (Greece).
After JINR joined the MAMMA collaboration, the second site of the complete production cycle was set up, actively supported by N.A. Russakovich and V.A. Bednyakov (the Micromegas chambers for the ATLAS experiment are produced from the components, centrally delivered from CERN to all the project participants). The muon team at this site has the opportunity to develop and fabricate by themselves detectors of necessary geometry and configuration.
It is obvious that the complete cycle site at DLNP ensures more effective JINR participation in various physical experiments, as well as in applied studies. To illustrate, we can mention joint projects with the University of Turin on evaluating a Micromegas based detector as a candidate for the application in the COMPASS++/AMBER scientific programme. The third detector version has already been designed and successfully tested at the RD51 laboratory, CERN.
The team responsible for the Micromegas chambers at DLNP is quite young. There are 9 scientists younger than 30 among the 19 group members. The project is directed by Aleksi Gongadze and Georgy Chelkov.
More photos you can find here.