Evidence of antineutrino oscillations found in the NOvA experiment

Evidence of antineutrino oscillations found in the NOvA experiment 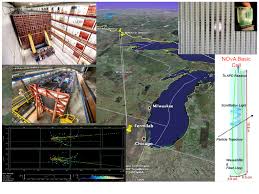 Today, at the Neutrino2018 conference in Heidelberg, the NOvA collaboration reported the first results from the antineutrino experiments, which indicate that muon antineutrinos oscillate into electron antineutrinos. This phenomenon is observed for the first time.

The NOvA neutrino experiment with a record large distance between the source and the detector is set in the Fermi National Accelerator Laboratory (Fermilab).The goal is to study neutrinos, the particles capable of passing through matter without any interaction with it.The long-term goal of the experiment is to find similarities and differences in how neutrinos and antineutrinos change from one type, muon neutrino in this case, to two other types, electron and tau neutrinos.The evidence for this transition of neutrinos and antineutrinos and their comparison will allow scientists to better understand how the Universe is constructed.

The NOvAexperiment uses two detectors: a smaller detector at Fermilab, Illinois, and a larger detector in Minnesota, 810 km away from the smaller one. Neutrino and antineutrino beams are produced at Fermilab and sent to Minnesota straight through the Earth without any special tunnel.

If antineutrinos did not change from the muon to the electron type, scientists would observe only five assumed electron neutrinos in the far detector during the first run.However, after the analysis of the recorded data, scientists found 18 antineutrinos of this type, which became evidence for existence of antineutrino oscillation.

Photo from the UCL NOvA site.