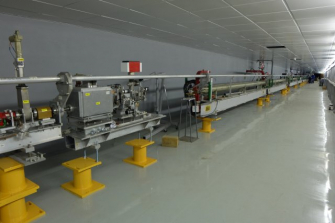 The commissioning of the linear electron accelerator LINAC-200 is underway at the Dzhelepov Laboratory of Nuclear Problems. It is assumed that it will enable the performing of methodological studies by elementary particle detectors designed at DLNP and neighboring laboratories on the test electron beams with the energy of 20 to 200 MeV within a wide range of the beam intensity. In the future, electron energy can be increased to 2 GeV.

The history of this JINR facility dates back two decades when the DELSY synchrotronic source project was being prepared. For this purpose, the MEA linear electron accelerator, first intended for the energy of 800 MeV, was transported from the Netherlands to Dubna. It is well known that the DELSY project was not accomplished for certain reasons. However, the installation of the MEA accelerator was continued in FLNP Building 118 in the hall, previously meant for the LIU-30 accelerator, within the project of International Linear Collider. The gun and four of thirteen accelerating sections were assembled, which made it possible to accelerate electrons to the energy of 200 MeV. The accelerator itself is in a good condition, though some units and the control station still need to be upgraded.

After the accelerator was transferred to DLNP, a new phase was set up. A new linear accelerator sector was founded within the Scientific and Experimental Department of colliding beams. By concerted efforts, the team led by head of the seсtor M.I. Gostkin and chief engineer of the facility V.V. Kobets installs and adjusts the accelerator and the test beams. There are young graduates from the Moscow Engineering Physics Institute, Tomsk Polytechnic University, and Dubna State University among the staff members. The linear accelerator and the test electron beams with all the necessary equipment will be put into operation after the renovation in Building 118 have been finished. That is expected in 2020.