Why is there more matter than antimatter in the universe? The reason might be hidden in the neutrino nature: one of the preferred theoretical models assumes that these elementary particles are identical with their own anti-particles. This in turn would lead to an extremely rare nuclear decay process, the neutrinoless double-beta decay (0nββ). The experiment GERDA now has reached a most important improvement in the search for 0nββ decay by reducing the disturbances (background) to an unprecedented low level making it the first “background-free” experiment in the field. This achievement is reported in the recent Nature article appearing April 6th, 2017 (doi:10.1038/nature21717). 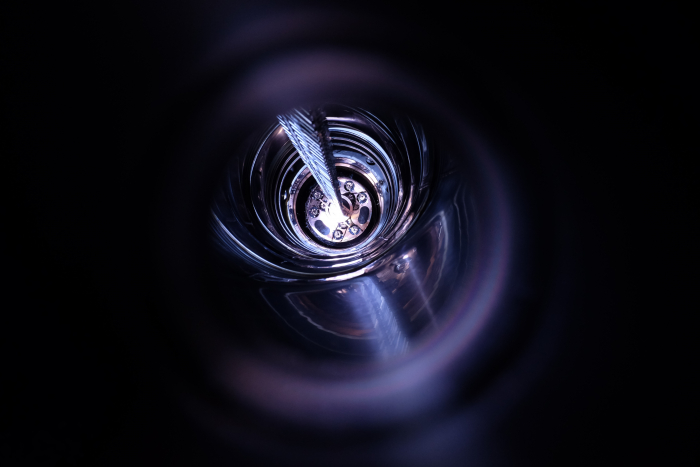 Neutrinos are ghostly particles which are extremely hard to detect. They play a central role in how the sun burns, how supernovae explode and how elements are formed during the big bang. Determining their properties has advanced our understanding of elementary particles considerably, best documented by the fact that so far four Nobel prizes have been awarded to neutrino related research. One fundamental property is still unknown: are neutrinos Majorana particles, i.e. identical to their own anti-particles? In that case 0nββ decay will exist. Strong theoretical arguments favor this possibility and the above mentioned absence of anti-matter in our universe is likely connected to the Majorana character of neutrinos.

“Normal” double beta decay is an allowed rare process where two neutrons in a nucleus decay simultaneously into two protons, two electrons and two anti-neutrinos. It has been observed for some nuclei like 76Ge, where single beta decay is not possible. The electrons and anti-neutrinos leave the nucleus, only the electrons can be detected. In 0nββ decay, no neutrinos leave the nucleus and the sum of the energies of the electrons is identical to the well-known energy release of the decay. Measurement of exactly this energy is the prime signature for 0nββ decay.

Because of the importance of 0nββ decay in revealing the character of neutrinos and new physics, there are about a dozen experiments worldwide using different techniques and isotopes. The GERDA experiment is one of the leading experiments in the field, conducted by a European Collaboration. It is located in the underground Laboratori Nazionali del Gran Sasso of the Italian research organization INFN.

GERDA uses high-purity germanium detectors enriched in the isotope 76Ge. Since the germanium is source and detector at the same time, a compact setup with minimum additional materials can be realized leading to low backgrounds and high detection efficiency. The excellent energy resolution of germanium detectors and the novel experimental techniques developed by the GERDA collaboration provide unprecedented suppression of disturbing events from other radioactive decays (background events). Since 0nββ decay has a half-live many orders of magnitude longer than the age of the universe, the reduction of background events is most crucial for the sensitivity.

The bare germanium detectors are operated in 64 m3 of liquid argon at a temperature of -190 degree Celsius. The argon container itself is inside a 590 m3 tank filled with pure water which in turn is shielded by the Gran Sasso mountain against cosmic rays. The used argon and water are extremely pure in uranium and thorium; the liquids act as further shield for natural radioactivity from the surrounding. Their instrumentation provides additional means of background identification.

The novel techniques employed by GERDA reduced the number of background events in such a way, that now it is the first “background-free” experiment in the field. No 0nββ decays have been observed during the first five months of data taking and a lower half-life limit of 5x1025 yr was derived. Until the end of data taking in 2019 no background event should be left in the energy region where the 0nββ signal is expected and a sensitivity of 1026 yr will be reached. This makes GERDA best suited to discover a signal, which would manifest itself by a small number of events at the signal energy. 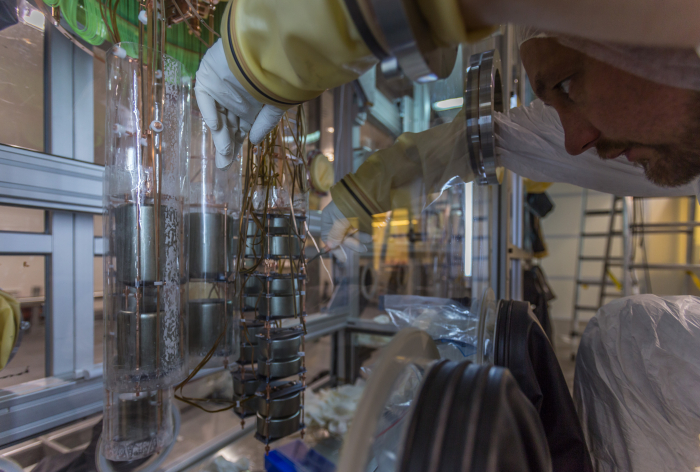