Signals from Inside the Earth: Borexino Experiment Releases New Data on Geoneutrinos 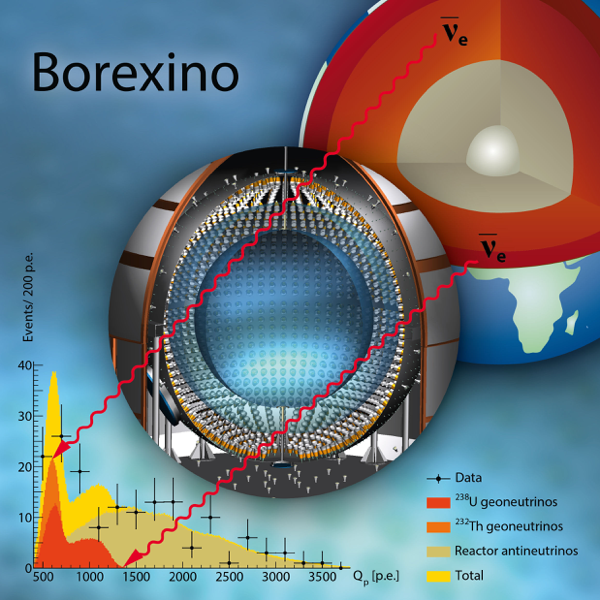 Scientists involved in the Borexino collaboration have presented new results of the measurement of neutrinos originating from the interior of the Earth. The Borexino detector is located 1,400 metres below the Earth's surface in the Gran Sasso massif near Rome. The elusive "ghost particles" rarely interact with matter, making their detection extremely difficult. With this update, the researchers have now been able to access almost twice as many events as in the previous analysis of the data. The results provide an exclusive insight into processes and conditions in the Earth's interior that remain puzzling to this day.

The Earth, like the Sun, is shining, even if it is not at all visible to the naked eye. In contrast to solar neutrinos being generated by nuclear fusion, geoneutrinos are antiparticles, antineutrinos, which are produced in radioactive decay processes in the interior of the Earth. Every second, about several millions of these elusive particles penetrate every square centimetre of our planet's surface.

The Borexino detector, located in the world's largest underground laboratory, the Laboratori Nazionali del Gran Sasso in Italy, is one of the few detectors in the world capable of observing these ghostly particles. Researchers have been using it to collect data on neutrinos since 2007, i.e. for over ten years. By 2019, they were able to register twice as many events as at the time of the last analysis in 2015 - and reduce the uncertainty of the measurements from 27 to 18 percent, which is also due to new analysis methods.

“Geoneutrinos are the fingerprints of the radioactive decays that occurs inside the Earth producing an as yet unknown portion of the thermal energy driving the dynamics of our planet”,- explains Oleg Smirnov, the head of the Borexino group at the DLNP,- “Special interest represents the geoneutrino signal from the Earth’s mantle, inaccessible for direct geological measurements.”

The researchers from the Borexino collaboration have extracted the signal of geoneutrinos coming from the Earth's mantle with an improved statistical significance by exploiting the well-known contribution from the Earth’s lithosphere.

The intense magnetic field, the unceasing volcanic activity, the movement of the tectonic plates, and mantle convection - the conditions inside the Earth are in many ways unique in the entire Solar System. Scientists have been discussing the question of where the Earth's internal heat comes from for over 200 years. Only at the beginning of the 20th century, it became obvious that the significant contribution to the total heat generation can be provided by radioactivity as well.

"The hypothesis that there is no radioactivity left deep in the mantle can now be excluded at 99% confidence level for the first time. This makes it possible to establish lower limits for uranium and thorium abundances in the Earth's mantle," says Oleg Smirnov.

These values are of interest for the variety of Earth models calculation. For example, it is highly probable (85%) that radioactive decay processes inside the Earth generate more than half of the Earth's internal heat, while the other half is still largely derived from the heat released during formation of the Earth. Radioactive processes in the Earth therefore provide a non-negligible portion of the energy that feeds volcanoes, earthquakes, and the geodynamo mechanism responsible for Earth's magnetic field.

The publication in Phys. Rev. D not only presents the new results, but also explains the analysis in a comprehensive way from both the physics and geology perspectives, which will be helpful for physicists working with next generation liquid scintillator detectors that will measure geoneutrinos.

The measurement of geoneutrinos from the mantle with better precision is still the challenge for researchs. This problem could be solved with detectors placed in different locations on our planet. There is a project on geoneutrino detector construction in Russia, at the Baksan Neutrino Observatory (BNO). Another one of this kind is the JUNO detector being now under construction in China. Scientists from JINR and other research centres from Russia are involved in this project. The detector will be 70 times bigger than Borexino which helps in achieving higher statistical significance in shorter time.

It became an Editors' Choice article of Physical Review D in this issue:

The diagram shows the Borexino detector, a spectrometric instrument able to measure incoming neutrino energy. The geoneutrino energy spectrum is measured in this way (bottom left).

Oleg Smirnov
DLNP, JINR, Dubna
+7 49621 63518
E-Mail: This email address is being protected from spambots. You need JavaScript enabled to view it.

Elena Dubovik
DLNP, JINR, Dubna
+79163367479
e-mail: This email address is being protected from spambots. You need JavaScript enabled to view it.